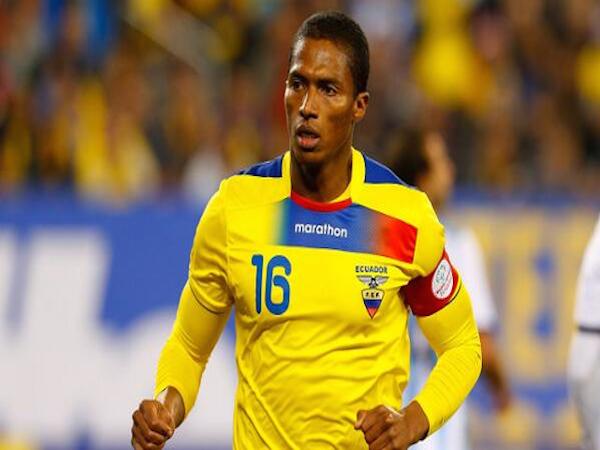 Ecuador’s FIFA World Cup campaign has been dampened by the sickening injury to Segundo Castillo, which has ruled the midfielder out of the tournament.

During a friendly match against Mexico, Castillo and Mexican midfielder Luis Montes collided into each other, which resulted in both players needing to be stretchered from the field.

Castillo later had scans on his leg and it was revealed that the 32-year-old tore his right ACL.  He will now be replaced by Oswaldo Minda, who was initially in the provisional 30-man squad.

But apart from the less-than-ideal preparations, the Ecuadorian squad still boasts some quality personnel.  With top European club experience, Ecuador will need to tap into all of their resources if they want to make a dent during the World Cup.

Led by captain Antonio Valencia, the pacey Manchester United midfielder will need to bring his best football to Brazil in order to steer his side out of the group stages.

Ecuador will have their hands full as they tackle France, Honduras and Switzerland in Group E of the World Cup.

Switzerland are the highest ranked side in the group at No.6, with France at No.17, Ecuador at No.26 and Honduras at No.33.

However, after missing out on the 2010 FIFA World Cup, the South American nation would be reveling in their return to football’s biggest stage.

Manager Reinaldo Rueda has been in the job for close to four years and will finally have the chance to guide his side through to their third World Cup campaign.

The strength for Ecuador looks to be in their midfield.  But other than the obvious presence of Antonio Valencia, the experience of Christian Noboa, Edison Mendez and Luis Saritama will be invaluable.

But if Antonio Valencia is unable to fire on the big stage then Ecuador’s already slim chances of progressing will be dashed.

Mendez is the most experienced player in the squad with 110 international caps for Ecuador.  The 35-year-old will provide great service for his forwards in what will potentially be his final World Cup appearance.

Ecuador’s only player under 23 years of age is Stuttgart midfielder Carlos Gruezo.  He is fast becoming an important player in his club side and will aim to provide some flair in an aging Ecuadorian line-up.

The forward structure will be mainly centered around Enner Valencia.  Since scoring his first international goal against Group E opponent Honduras late last year, Enner Valencia has found the back of the net three times in his past four games.

Enner Valencia will also be aided by former Manchester City player Felipe Caicedo, who is a proven goal scorer  Before settling at Al-Jazira, Caicedo had loan stints with Sporting Lisbon, Malaga and Levante.

Ecuador’s weakness seems to be their aging defense.  Their last win came against Australia in a friendly two months ago, where they had three goals scored against them in the first half alone.

As Australia is the lowest ranked team in the World Cup, Ecuador will need to tighten up defensively when they come up against the likes of Switzerland and France.

First choice goalkeeper Maximo Banguera should be fit and ready for their opening match, with Alexander Dominguez his likely replacement if need be.  Dominguez was called upon at times during qualifying matches and provides adequate support if required.

Ecuador’s excitement in returning to the World Cup after missing 2010 should see them put on some honorable performances.  But if they are too Antonio Valencia-conscious then predictability will be their downfall.

As a South American team, qualification is as hard a task as the World Cup itself.  And although it’s pleasing to see Ecuador back, they will need a miracle to make a significant impact in Brazil.