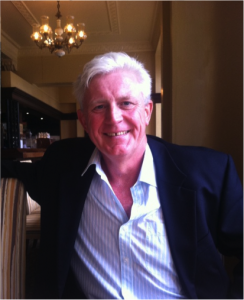 Throughout the course of a career spanning over thirty years, Steve Kelly has witnessed the evolution and transformation of the journalism industry firsthand. Working as a young journalist, he briefly lived a rock star lifestyle; picking and choosing his own stories, flying around the world for free, and living it up in first class hotels. Now, navigating what has become a fiercely competitive, technologically driven industry, he has settled in the South West Victorian town of Warrnambool as the editor of The Warrnambool Standard.

How did you find your way to a career in journalism?

I was born in Ireland, but my family moved to the United Kingdom when I was quite young. I had planned to go university to study English Literature, but I was offered a cadetship at a provincial evening newspaper in Swindon, Wiltshire.

In my mid twenties, I landed the best job in the world: working as a journalist for a travel trade publication. Because I was writing advertorial, I never travelled in economy; always first or business class, staying in these incredible first class hotels. You could organise and plan your own trips, come up with your own concepts for the publication. As long as it was promoting the airline, the destination and the hotel, you could stay everywhere free. It was a Hollywood lifestyle; I travelled to around 25 countries in two and a half years. It was the eighties, it was wild.

What brought you from the United Kingdom to Australia?

After I left the travel publication, I returned to the UK and trained to be a subeditor. I migrated to Australia out of that job, through the Independent Migrants Program. It was one of those big life decisions; migrate to Australia or stay in London. I came here in 1989, on a whim really, with $1200 that was gone in two weeks, all spent on Brunswick Street.

I basically just called the editor of The Sun News in Victoria, and told him I needed a job. In those days there were lots of jobs, and I started work as a subeditor, kick-starting my career in Australian journalism. I worked at The Sun for six years, then The Sydney Morning Herald and The Age. Five years ago I moved to Warrnambool to edit The Standard.

That’s the thing about journalism, it can take you anywhere. It’s taken me everywhere; ending up in Warrnambool, which never ceases to amaze me.

What challenges do you face as the editor of a regional newspaper?

To be honest, this is the most challenging job I’ve had in journalism. It’s a leadership role, so I’ve had to learn a lot about how to lead a team of people and how to mentor and set an example. But it’s also hugely demanding because of the community expectations in a place like [Warrnambool]. There is an ownership of The Standard from the readership that I had to learn about very quickly. I did some things early on that were probably ill judged. I took out the stock listings, because I wanted to create extra space for local news, and the readership just went crazy about it. They basically said, ‘we’re not all online down here and we rely on The Standard for this type of information.’ This was five years ago.

Did you bring back the stock listings pretty quickly?

I brought them back within a week.

What impact has the rise of online journalism had on The Standard?

We’re in this really awkward transition period, where we don’t really know what’s going to happen next. For the first time, probably in its 140-year history, the circulation of The Standard is beginning to flatten out. You can see why, because the online figures that we produce are showing an exponential increase in unique browsers.

The challenge there is that the newspapers have given away this online content for nothing. I’m of the view that we are already suffering for that and I think that this period of journalism will be seen as a black period, because we gave away everything we had for nothing, and then tried to claw it back. Two percent of the revenue generated by regional Fairfax Media, is generated through its digital arm. 98 per cent still comes from display advertising and classifieds in regional print papers, and yet circulation is falling. So we suddenly have a dilemma here in that we’re trying to maintain our attractiveness to advertisers, while circulation figures fall. We’re finding it a slow process to attract our advertisers over to our digital products.

Do you believe regional culture and attitude plays a part in The Standard’s advertising partner’s resistance to embrace the digital format?

Absolutely. In regional areas there is a much slower uptake of information technology. It might sound patronising, but it’s essentially a fact. Regional areas haven’t caught up to metropolitan areas yet. But the same thing is happening in metropolitan areas; it’s a struggle to find the same level of advertising revenue for digital products.

How will The Standard attempt to entice advertisers to the online version of the publication?

I believe we have to keep doing what we’re doing in the newspaper because although circulation is flattening, it’s not plummeting, and there is clearly still a demand for a newspaper in this regional area. At the same time we have to try and convince advertisers to spend money with our digital product, and in time we think one will overtake the other.

If this happens, will we see the demise of the paper and ink version of The Standard?

I think that I may well be the editor of The Standard when it goes from being a daily newspaper to something else. I think it’s inevitable that consumers reading habits are going to go from buying newspapers to consuming content online. With the pace of change down here, I don’t know, The Standard might still be a daily newspaper in six years. Ten years time, I wouldn’t bet on it.

Finally, what tips can you offer to emerging journalists trying to break into the industry?

[Online news] is an opportunity; it’s not the death of journalism. You absolutely have to be connected to, and understand social media. You have to understand immediacy, and the 24 hour news cycle. You have to understand the digital landscape of how news is now delivered; from the iPhone, to the television to the tablet computer. The path of the story is what I like to talk about. Journalists need to understand that they are writing for all these platforms, they need to be prepared to do that, and to have a full understanding of the path of the story over 24 hours.