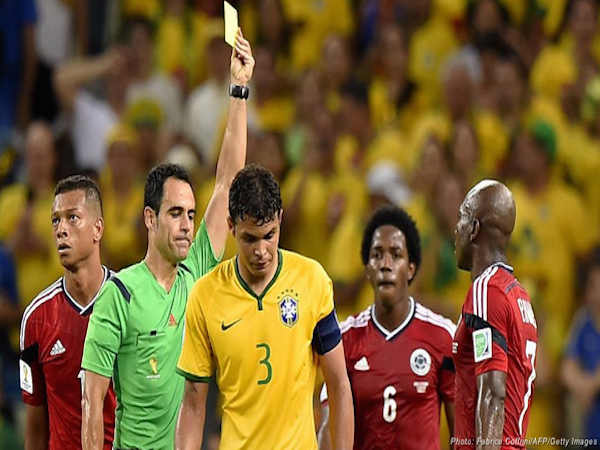 When Thomas Muller made it 1-0 to Germany in the 11th minute of Wednesday morning’s unbelievable semi final against Brazil, no one knew just what would follow.

As Toni Kroos’s corner swung in, Muller peeled away from the pack of players at the near post to apply the easiest of finishes completely unmarked.

While injured forward Neymar is undoubtedly Brazil’s star man, it is captain and defender Thiago Silva who is arguably their most important, with the leadership, organisation and passion he brings to the team acting as the glue that holds the Selecao together.

So where was he during all of this? Sitting up in the stands, missing the game through suspension.

The central defender was serving a one-match ban after he picked up his second yellow of the tournament in his team’s narrow 2-1 quarter final win over Columbia. Adjudged to be blocking a kick from opposition ‘keeper David Ospina, he was promptly shown a yellow card for an action that very much appeared unintentional.

The current rules state that a player who accumulates two yellow cards at any stage before the semi final games will miss the next game. The tally is then reset to ensure that any cautions in the quarter and semi final games would guarantee that the sides in the final would be at full strength – barring injury or a semi final dismissal.

While FIFA has protected players for the final, the showpiece match of their showpiece event, it has not completely done so for the games preceding it.

While Brazil launched an appeal hoping that the defender could play in the semi final, it was unsurprisingly thrown out.

Article 77 b) of the FIFA Disciplinary Code stipulates that the Disciplinary Committee may rectify errors, but it is only possible when a referee shows a yellow or red card to the wrong player; rules that should arguably be expanded or loosened.

Referees don’t take long to make the call and if that decision proves to be an honest mistake or incorrect, a technicality should not deprive the tournament of some of its star names.

While FIFA allowed Garrincha to play in the 1962 World Cup final, despite the Brazilian forward being sent off in the semi final for retaliating after being continually fouled, times and rules have changed and the Brazilian star would certainly not have been allowed to play today.

Interestingly, in most cases a red card at a World Cup will incur a one-match ban: the same as two yellows.

Red cards are usually given for either more malicious or frequent fouls in one game and the fact that a player could receive the same suspension for two harmless yellows spread out over the tournament doesn’t seem quite right.

In the modern game it can be quite common for someone to pick up a yellow card for a relatively minor offence and, all of a sudden, someone could be subsequently forced to miss a match.

It could also be argued that, under the current system, players can’t perform properly or as naturally as they normally would, knowing that just one more booking means they will miss their next game.

An early yellow card to Brazilian forward Neymar in the hosts’ opener against Croatia, the first of the tournament, had a whole nation worrying that a second caution could see him banned from a vital match en-route to the final.

Such is the forward’s quality, to deprive the competition of the flair, creativity and excellence he provides would unjustly detract from it as a spectacle, especially if either caution was minor.

While Neymar didn’t pick up another yellow card, the rule did deny Socceroos legend Tim Cahill from playing in Australia’s final dead-rubber fixture against Spain.

After picking up bookings in the first two group games, Cahill, at 34 years of age, was cruelly denied a final World Cup appearance in a game in which both teams had already been eliminated.

With various other alterations being implemented into this edition of the World Cup, FIFA has shown it is open to change and willing to implement it.

Many facets of the current structure are appropriate, but perhaps small changes regarding suspension for future tournaments could be merited.

Whether it’s the increasing the number of yellows before suspension, the timing of the tally reset, increasing the leniency of referees, altering appeal legislation or something else entirely, some small further modifications for Russia 2018 to ensure a fair and balanced system would not go astray.