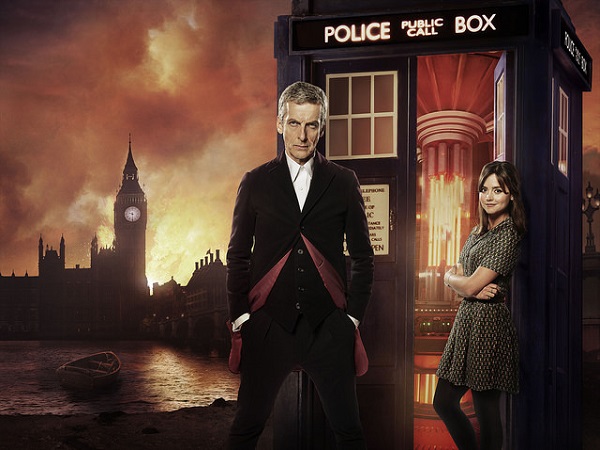 doctor who peter and whats her face

Season eight of popular sci-fi show Doctor Who will premiere in movie theatres world wide, but what is it that makes this television programme cinema worthy?

The BBC’s most beloved blue box returns this weekend with a new season and a new Doctor. Season eight’s feature-length premiere episode, Deep Breath, will be shown for free on ABC1 and released on ABC iview, but fans will also have the option to pay to watch their favourite show because it will be broadcast in nearly all major cinemas around the world.

There is no question the show is a hit.

Dallas Jones is the Vice President of the Doctor Who Club of Australia, and he credits the show’s longevity, quality and universality for its continued popularity.

“You have the monsters and scary bits for kids, but you also have interesting stories for the adults.”

Jones believes the strength of the characters in the rebooted series has attracted a large teenage and young adult audience.

All the same, the move to screen the premiere episode in cinemas can seem strange, especially as the same episode will be shown on free-to-air television and legally available online on the same day.

However, the BBC does have its reasons. One very good reason is the precedent set by last year’s 50th Anniversary Special, which had a short-run release in cinemas last November.

The official BBC Doctor Who website explicitly notes the connection, saying: “This year’s screenings follow the success of the global cinema release of Doctor Who’s 50th anniversary episode The Day of the Doctor.”

Peter Calpaldi as the 12th Doctor and Jenna Coleman as Clara Oswald. Source: Doctor Who Spoilers

This success included an official world record and an impressive box office figure. The Guardian reported that the special made $10.2 million in its first three days in cinemas worldwide.

Only Hunger Games: Catching Fire and Gravity made more money over the same period, and both were showing in a greater number of theatres.

It’s not a bad effort for a show about a madman with a box, and it seems BBC executives would like to replicate the result with Deep Breath.

The screenings have benefits for the fans as well.

Jones says many people would be attracted by the more social format.

“You can sit at home and watch anything you like, but it’s very insular. Fans like to be involved with other people who enjoy the program. It’s a chance to go to your local cinema and find 100 or 200 other people going to see the same thing,” he says.

“They congregate in the foyer beforehand and talk to each other and enjoy the shared experience. There’s more talking and more interaction afterwards – which is why you go to see it in the cinema. You enjoy the big screen, but you’re also going to see it with other people.”

On a wider level, society’s changing attitude towards film and television means a cinema release is not as ridiculous as it used to be.

Anna Dzenis is a La Trobe University Cinema Studies Associate Lecturer. She told upstart that the line between film and television is increasingly blurry.

“For a long time there was a paradigm that ‘film is genteel’ and ‘television is vulgar’,” she says.

“In this paradigm films were regarded as storytelling forms that engaged, possessed and captivated us in a cinema, whereas television was something that you watched at home while you were doing other things.  Now this paradigm has clearly changed. Television has become much more sophisticated – formally and narratively – and we are watching television on bigger screens”.

Ms Dzenis points to the inclusion of selected television series in the recent Melbourne International Film Festival as one piece of evidence of the increasing number of television series being shown in cinemas.

However, it is still very rare for a regular episode of a television show to hit cinemas on the same day it premieres on the screens in our homes.

Jones doesn’t think it will be a regular occurrence.

“You wouldn’t do it with every single story, but there is the introduction of the new Doctor, and that gives it a reason to be specifically put on cinema,” he says.

“Personally, I don’t think the response will be as great [as the Anniversary Special], but I still think it will be a great event and a great day on Sunday.”

Erin Leeder is a staff writer for upstart and a second-year Bachelor of Journalism student at La Trobe University. You can follow her Twitter: @155erin.