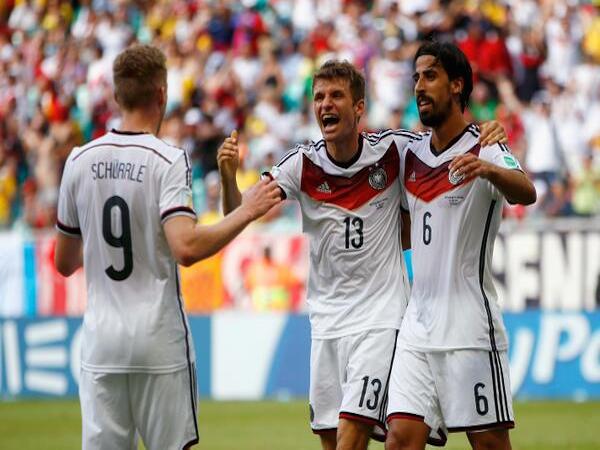 It seemed like a pretty simple prediction to make.

Scrolling through the lists of groups after the World Cup draw, Group G looked reasonably straightforward. Germany? Definitely going through. Portugal? They’ve got Cristiano Ronaldo; they’re a sure thing. And while the USA and Ghana may have had a glimmer of hope, their chances of progression seemed small.

This was mainly due to Germany, the model of Teutonic efficiency, playing terrifying, precise football, performed again and again in the lead-up to the tournament. Meanwhile Portugal boasted a host of squad full of talented individuals.

While the USA, a plucky band of upstarts, and Ghana, the fourth-ranked African side, were always going to threaten, the two likely to progress from Group G seemed pretty straightforward.

Then came the injuries – beginning with Marco Reus.

IThe 25-year-old German winger, a frequent scorer for Borussia Dortmund, rolled his ankle in a World Cup tune-up match against Armenia and was immediately ruled out until September.

As Germany does, it simply replaced him with another cog in the machine. But there are few in the world that can do what Reus does.

The injuries kept stacking up. Ronaldo’s troublesome thigh flared up. Then it was his knee. Then his back. Right up until a day before the World Cup, the world’s best player was under an injury cloud.

Germany’s hard-nosed midfield general Bastian Schweinsteiger was airlifted to a Brazilian hospital under FIFA orders. It turned out that it was purely for insurance purposes, but it still sent a shockwave through international football. Are the Germans beatable now?

As it turns out – no, they seemingly are not. Without Schweinsteiger and Reus, playing a 4-6-0 formation with no strikers and four centre backs, they smacked a hapless Portugal into submission, 4-0.

Thomas Müller scored a hat-trick, shortening his odds to become the first man to win the Golden Boot at two consecutive World Cups. Mats Hummels added the exclamation mark with a towering header.

It didn’t help that Portugal added to their own woes. Pepe did what Pepe does, which is lose his cool, headbutt people on the ground and earn himself a red card. First-choice right back Fabio Coentrao is out of the tournament after being substituted with a leg injury and Hugo Almeida, who started as the lone striker, was also taken off early in the first half.

What of the brilliant Ronaldo? He looked all at sea without the support he enjoys at Real Madrid, save for a thundering free kick when the game was lost, which was dealt with rather easily by German ‘keeper Manuel Neuer.

The result made the clash between the USA and Ghana all the more tantalising. A win for either team set up a very realistic chance of progression. Suddenly, plenty more was at stake.

It was the USA’s day. A perfect start, 1-0 after 29 seconds through Clint Dempsey, then nearly a full match of defending against an Ghanaian onslaught. They slipped to Andre Ayew deep in regular time, but finally were saved by substitute John Brooks’s header with barely any time left. 2-1 to the USA was the final result.

Who makes it through from here? Portugal are bleeding and staggering. Germany are as sure a bet to progress as there is. The USA have a chance to land the knockout blow against Portugal on Sunday and Ghana will be ruing the opportunity they let slip, desperate to take something – anything – off the relentless Germans.

If the USA can take three points off a Portuguese team without its first-choice centre back and left back, the group is as good as done. A draw makes things interesting.

The best that Ghana’s Black Stars can hope for against the Germans is a miracle draw, but then will face a desperate, clawing Portugal, for whom goal difference will likely be important.