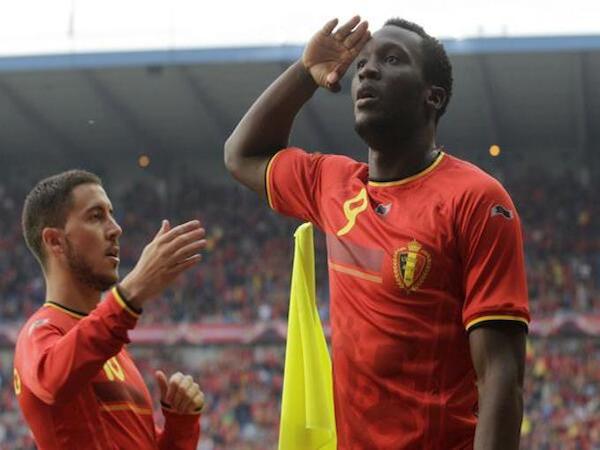 Only four years ago it would have been ludicrous to suggest Belgium could go anywhere near contesting the 2014 FIFA World Cup.

But now, as the Red Devils commence preparations for Brazil, they find themselves locked in as the competitions ‘dark horse’.

Qualifying for the finals in recents attempts proved to be difficult task for Belgium, making their last World Cup appearance 12 years ago when South Korea and Japan played host in 2002.

Such is their resurgence, Belgium now enters the tournament ranked 12th in the world and placed as fifth favourites across betting agencies, higher then previous champions France, England and Italy.

Are you watching, Jose? Romelu Lukaku has a hat trick and Belgium are cruising 3-1 vs. Luxembourg. pic.twitter.com/lL3NMJK0Vl

“We’ve got a good generation of players, many of whom ply their trade abroad and are playing regularly in international competitions. That’s made us a lot stronger,” van Buyten said.

“All the young players are suddenly playing abroad. They all used to play in Belgium. They were still good players, but only as good as the Belgian League.”

They may not posses the history and tradition associated with the likes of a Brazil or Italy, but there is a new-found aura that surrounds the Belgian national team ahead of the World Cup.

Manager Marc Wilmots has assembled one of the most intimidating squads going to Brazil, combining a balance of strength, pace and power from front to back.

A mixture of youth and experience are featured in Wilmots’s side, consisting of Atletico Madrid keeper Thibaut Courtois, Manchester City Captain Vincent Kompany and in-form striker Romelu Lukaku to name a few .

However all eyes are expected to be fixated upon Chelsea star Eden Hazard, the most highly rated player amongst Wilmots’s squad.

Since moving to Stamford Bridge in 2012, the skilful winger has thrived in the Premier League, with former Belgium coach Georges Leekens expecting the 23-year-old to contend with the likes of Lionel Messi and Cristiano Ronaldo at the World Cup.

“The World Cup is the right moment to show himself, he will be excellent,” Leekens said.

“His performances against the likes of Manchester City and Liverpool have shown he is ready for the biggest teams in the World Cup.

“He has the talent to be considered on the same level as Ronaldo and Messi. After the World Cup, maybe people will stop comparing him to those players and appreciate him for the player he has become.”

Manchester United teenager Adnan Januzaj is also likely to debut for the Belgian national team during the World Cup after bursting onto the scene throughout the 2013/14 Premier League campaign.

Despite being of Kosovar-Albianian heritage, Januzaj declared his allegiance to Belgium only last month, receiving hostility from fellow winger and international teammate Kevin Mirallas.

“I don’t think he should go to Brazil,” the Everton winger said in April.

‘It would not be fair to leave out another good player for someone who does not know the others and has not played a lot for his club in recent months.”

However Belgian captain Vincent Kompany nullified any fears of the teenagers introduction.

“Everyone is, first of all, happy to be in the selection,” he said.

“Then, ultimately, it is the manager’s job to make a decision and I think we are all quite happy just to leave it to the manager and trust him for the decisions he makes.

“We have great players in the team so hopefully for the World Cup we will have a great performance as well.

“We are always happy to welcome new players, always.”

Easing through the qualification stage to solidify their spot in Brazil with a game to spare, Belgium brushed aside Serbia, Croatia and Scotland to book a place in 2014s Group H. There, they will find themselves lining up against South Korea, Algeria and Russia.

Such was their dominance in the lead-up to the event, Belgium won eight of their 10 qualifiers, only drawing twice.

If they were to finish a top of Group H, Belgium could evade a date with powerhouse Germany in the round of 16 and could potentially surpass their best ever World Cup run, which saw them reach the 1986 Mexico semi-finals, eventually conquered by Diego Maradona’s Argentina.