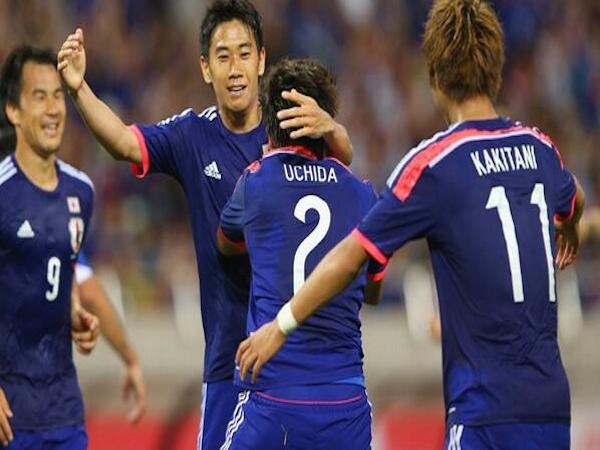 The kanji characters that make up the Japanese name for Japan, Nippon, refer to a “land of the rising sun”, much likes its flag, emblazoned with a red, rising disk.

Ahead of the 2014 FIFA World Cup, Japan’s national football team has never represented its country’s rich culture more than it does now.

With a young, vibrant and exciting group of talent, Samurai Blue are ready to enter Brazil as the rising sun’s of world football.

Italian manager Alberto Zaccheroni has taken a squad packed with raw potential and molded it to maximise its sharp pressing, passing and counter-attacking style.

Following a routine qualification campaign and an impressive, although regrettable, 2013 Confederations Cup, Japan is ready to surprise in Brazil.

Leading the charge is an attacking trio consisting of some of Europe’s most prized assets in Shinji Kagawa, Keisuke Honda and Shinji Okazaki.

Collectively, their work-rate, energy and crisp passing moves turn Japan into a free-flowing and entertaining unit.

While Kagawa – of Manchester United – and Honda – of AC Milan – might often steal the headlines, it’s Okazaki who has had the standout season of the three.

15 goals from 31 starts for Bundesliga side Mainz 05, as well as seven goals from his last 12 appearances for Japan, has seen the diminutive forward become one of Zaccheroni’s most dangerous players.

“Everyone focuses their attention on Honda and Kagawa. They’re the two pin-up boys of the team, but Okazaki is quite often the one who gets the job done and with a minimum of fuss.

“His goal scoring record is incredible – almost a goal every two games – and his move to Mainz this season was a masterstroke. He is the in-form player for Japan. I expect him to be a bit of a barometer for them in Brazil.”

However, despite posing such an attacking threat whenever in possession, one of Japan’s biggest downfalls remains their inability to consistently find the back of the net.

The combination of Kagawa, Honda and Okazaki’s eye for a pass, along with the threat posed by attacking full-backs Yuto Nagamoto – of Inter Milan – and Atsuto Uchida – of Schalke – means Japan are expected to tear through the ageing midfields of Cote d’Ivoire and Greece.

Anchoring that forward line is a talented midfield consisting of captain Makoto Hasebe, the experienced Yasuhito Endo and the up-and-coming Hotaru Yamaguchi.

But the lack of a natural finisher at centre forward has long been an ongoing hindrance for the Japanese. However, even that trend is beginning to change ahead of the World Cup.

“It’s long been their undoing; creating a multitude of chances, but not having a regular goal scorer who can finish them off,” Williams says. “It’s cost them against Australia a few times.

“I have Osako as the No.1 and I think that’s the way Zaccheroni will lean when he names his team for the Ivory Coast game.

“He [Osako] took a risk moving to the second division in Germany in January, but it paid off handsomely for him when he started banging in the goals for 1860 Munich.”

Six goals from 15 appearances to start his career in Germany certainly hasn’t hindered Osako’s chances ahead of the World Cup. But the form of Kakitani, who notched 21 goals from 34 matches for Cerezo Osaka in the J-League last season, will certainly give Zaccheroni his fair share of positive headaches.

And Japan will need to score in Brazil – and often – as their defence is where the problems lie.

“Their biggest weakness is easily their defence,” Williams says.

“Maya Yoshida has been injured, while Yasuyuki Konno, who normally partners Yoshida at the back, has been playing in midfield for Gamba Osaka.”

But, in a team full of developing players, surely there is someone ready to fill the void at centre half?

“Masato Morishige has been given his chance recently and impressed” Williams says. “So there’s a chance Zaccheroni may elevate him above Konno to partner Yoshida.”

Although Japan didn’t pick up a point at last year’s Confederations Cup, they did begin to show their full potential.

A late 4-3 defeat to Italy, in particular, left many questioning the extent to which Zaccheroni’s side could continue to improve.

With only more positives coming from results since and, after being placed in a manageable group for the World Cup, there’s a growing sense that the “land of the rising sun” could soon be host to the land of one of football’s most exciting teams.