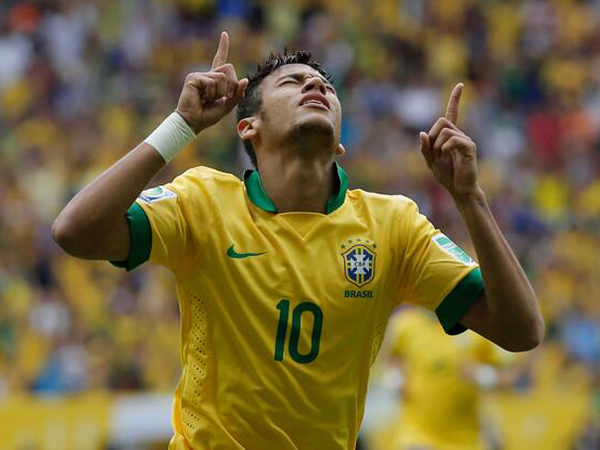 No country symbolises the beauty, colour and flair of the World Cup quite like Brazil.

The five-time winners embody sport’s finest tournament, raising competition legends such as Pelé, Garrincha and Ronaldo – all of whom have a stature in Brazilian culture as high as Rio’s Christ the Redeemer.

On beaches, rundown streets and alleyways or on the hallowed Maracanã, football is the lifeblood of the Brazilian people and the return of world sport’s showpiece event is sure to bring celebrations across the country as large as the carnival.

But with increased attention comes increased pressure – a trait A Seleção knows all too well about.

In every major tournament, anything less than victory is deemed automatic failure. It’s a pressure that has weighed heavily on the shoulders of recent teams, no less Carlos Alberto Parreira’s 2006 side and Dunga’s 2010 outfit.

And now, as the World Cup returns to Brazilian soil for the first time in 64 years, the suffocating intensity of that pressure grows once more.

But in Luiz Felipe Scolari, Brazil has a manager capable of garnering the hopes and dreams of a nation. The 2002 World Cup-winning boss, renowned for forging remarkable team spirit, was reinstalled as manager two years ago in the hope of leading the host nation to success.

Thus far, it has proved a masterstroke.

Brazil thrived on the pressure in the World Cup’s warm-up tournament, the Confederations Cup, in 2013. Easing past the likes of Italy and Spain, who just 12 months prior had played off in the Euro 2012 final, A Seleção looked as well-oiled as ever before.

Lifting the trophy in front of more than 70,000 adoring fans in Rio, Brazil was once again a nation at the forefront of international football and Scolari was once again the architect.

“It was the moment when the fans and the team found each other again after years of disillusion. The way the crowd sang the national anthem in Fortaleza long after the music had stopped and then the players joined in, reflecting the sense of patriotism and protest in the streets, really inspired the players on the pitch.”

Ditching high profile, yet disruptive figures such as Kaká and Robinho from his squad, Scolari has instead opted for a balanced, more fluid unit.

It was one that systematically dismantled organised Italian and Spanish sides in the Confederations Cup and, unsurprisingly for a settled squad, there were no surprises when ‘Big Phil’ announced the 23 men that would play in the tournament a fortnight ago.

But while Brazil appears ready to launch itself on the biggest stage, there remains fears of the side’s ability to deal with another wave of pressure once the tournament begins in earnest.

“Scolari is tremendously loyal to his men and after the Confederations Cup, only a really unstoppable run of form – from players such as Fernandinho and Willian – was going to be enough to get a newcomer into the squad,” Young says.

“That’s Scolari’s plan – ‘The Familia Scolari’ – as the squad is known. It’s possibly a worry, as it’s a togetherness built on success, rather than adversity, so it hasn’t really been tested.”

A player who has been tested – and one who will be put under the microscope once again in June – is Neymar.

In a football nation desperate to idolise individuals, it appears the talented 22-year-old is the chosen one to shoulder the brunt of responsibility throughout the tournament.

And while often criticised excessively for someone of his tender age, Neymar stepped up to the plate in last year’s Confederations Cup, winning the Golden Ball for Player of the Tournament.

“Other than Neymar, there isn’t much explosion,” Young says. “Fred and Jô are solid but not spectacular and Oscar is clever and skillful without being thrilling. He hasn’t had a great year at Chelsea, either. If the team goes behind, they might struggle for goals.

“[Therefore] it’s a huge amount of responsibility, but Scolari and his teammates will try and protect him as much as possible.

“It’s hard to know how he’ll react when the going gets tough. He has worked hard to cut down on his diving and petulance, but it can still resurface when things don’t go well.”

In a sense, Neymar embodies Brazilian football as a whole heading into this World Cup. Youthful, exciting and with undoubted talent, but yet still under a blanket of pressure from an expectant and unrelenting football nation.

Disappointment will be severe if the trophy doesn’t remain in the host country, but jubilation will engross an entire nation if the Maracanã is, once again, host to Brazilian triumph.