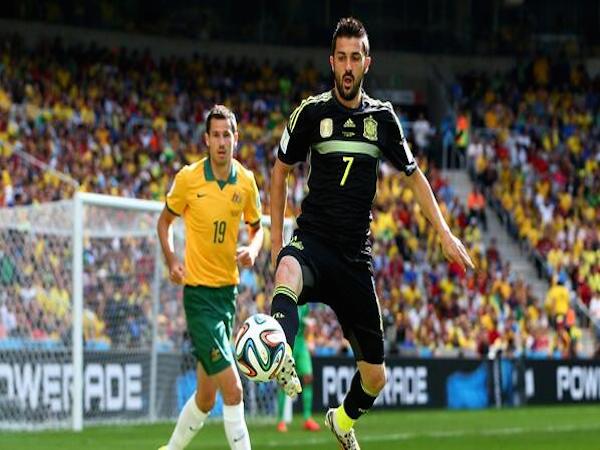 David Villa’s sublime back heel goal against Australia on Tuesday morning may have dealt a cruel dagger through the hearts of an otherwise impressive Socceroos outfit, who now leave Brazil without a single point.

However A-League fans would have been marvelling at the Spaniard’s opening goal in his final appearance for La Roja, as the 32-year-old is set to grace Australian shores later this year.

Villa’s contract with the City Group will see him arrive in Australia prior to the MLS season, which kicks off in March next year.

Such is his accolades, Villa will commence training with Melbourne as Spain’s all-time leading goal scorer, netting his 59th and final international goal against the Socceroos in the 36th minute on Tuesday morning.

Top scorer at both Euro 2008 and the 2010 FIFA World Cup, predictions are already flowing in for Villa to claim the A-League’s Golden Boot after only 10 rounds.

Announcing his retirement from international football prior to the World Cup, Villa was withdrawn from proceedings in the 57th minute by Vincente del Bosque, triggering an emotional farewell.

Teammates could be seen consoling the striker as he took his place upon the bench, bursting into tears shortly after his substitution.

Gerard Pique, Iker Casillas and Pedro were on their feet as they applauded their outgoing teammate, something of which the forward may be accustomed to regularly in Australia.

del Bosque later revealed he was unaware Villa had announced his international retirement.

“He said it was his last game, but I didn’t know that. I’m sure he was upset.

“All I was thinking about is that it was time to kill off the game and we did that.”

The 3-0 victory over the Socceroos also concluded a torrid campaign for the reigning world champions, failing to qualify for the round of 16 after defeats to Chile and the Netherlands.

Adding to Villa’s 36th-minute strike, goals from Fernando Torres and Juan Mata ensured Spain would avoid their third successive defeat for the first time since 1991.

Question marks now loom over del Bosque’s future with La Roja after rumours of discontent amongst the Spanish camp came to the fore earlier in the week.

The 63-year-old’s selections and tactics also left some scratching their heads as Spain looked a mere shadow of their unstoppable best from previous years.

One of the most dour regrets for del Bosque, though, would be the treatment of his departing cohort.

While Villa and Xabi Alonso were at least granted the opportunity of exiting in a 3-0 victory, the experienced and legendary Xavi reflected a heart broken figure as an unused substitute.

Above all, Villa’s goal sparked an explicit overflow of pride, culminated in a passionate display of badge kissing emotion.

A-League fans should be confident that Villa, still capable of playing for any team in the world, would exercise his desperation and desire to impress for his side.

His international credentials and superstar trademark will additionally no doubt boost the A-League’s profile, whose incredible fan base has already seen the likes of Manchester United and Liverpool play in front of sold out venues in pre-season friendlies.

To have a player of Villa’s calibre in the A-League will surely expand the hype and attraction of the domestic game in Australia.