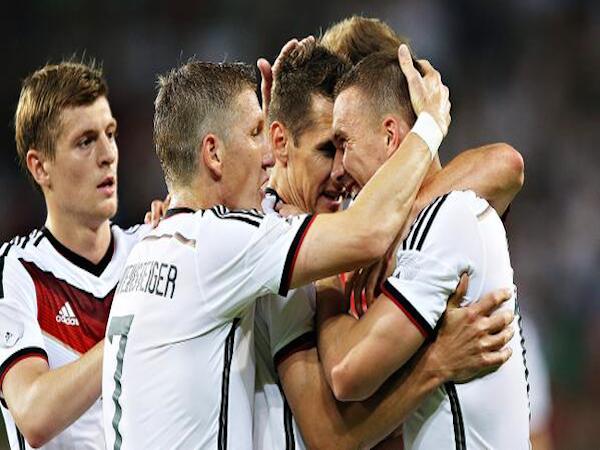 To label a country that has made the semi finals of the World Cup in six of the last seven tournaments as ‘perennial underachievers’ would usually be considered absurd.

But having never won a World Cup as a unified nation, Germany is on the verge of becoming just that.

For a country that breed’s footballing talent as consistently and effectively as the Germans, one World Cup win in 40 years is bordering on being classified as just not good enough.

On countless occasions, German sides have faltered at the final hurdle, unable to overcome the burden of such a successful past. It hindered Rudi Völler’s men in the final in 2002 and more so in the semi finals on home soil in 2006.

A late semi-final defeat to Spain in 2010, under current boss Joachim Löw, then felt like unnecessary salt in the wounds to Die Mannschaft supporters.

It’s the same scenario in European Championships, where a loss in the 2008 final was compounded by semi-final heartbreak to Italy in 2012.

It’s a touchy subject for many in Germany, particularly Löw who, although having one of the finest records at national level in the country’s history, is constantly under increasing pressure to deliver the main prize.

“I wouldn’t say Germany are a perennial underachievers,” Paddy Higgs, a German-based freelance journalist, tells upstart. “Yes, they have not won a World Cup as a unified country, but they won Euro 1996.

“They had what is now perceived as a rather weak generation in the 2000s and that, as well as some class Spain, Italy and Brazil teams, made it a tough few years.

“But the circle turns and the squad this year obviously has some fantastic players.”

That would be an understatement.

Normally, an injury to a player of Marcos Reus’s undoubted ability would be considered a massive blow. But Löw has a plethora of midfield talent at his disposal and could easily call upon any of Mesut Özil, Andre Schürrle, Lukas Podolski, Thomas Müller, Julian Draxler, Toni Kroos or Mario Götze to fill Reus’s void.

But with such a rich vein of young midfield talent coming through, Löw will be left with a slight imbalance in Brazil.

“Germany’s quality is definitely in midfield and particularly with their young attackers,” Higgs says. “Götze, Schürrle, Müller… They can all devastate teams.

“The weak areas are definitely up front and also at full back, where Löw might have to play guys more suited to a central position, particularly if [Philipp] Lahm plays in midfield.

“They might then be solid there but they’ll also lose a lot of drive.”

Lahm’s adaptability is one of Germany’s strongpoints. Spending the majority of his career at right back, he was molded into a stunningly competent holding midfielder by new Bayern Munich manager Pep Guardiola.

In fact, Guardiola’s arrival at Bayern Munich has created a similar reflection at national-team level with Germany as it did with Spain when the Catalan tactician took over at Barcelona in 2008.

A number of similarities, including a more fluent passing system and the implementation of a ‘False No.9’, have since transcended upon Löw’s side.

“Löw has shown his fondness for the False No.9 system with mixed success,” Higgs says.

“Even Guardiola struggled to fully convince with it at Bayern and he tried the same players there, Mario Götze and Thomas Müller, as Löw has.

“I think Bayern’s exit in the Champions League should also have rung some alarm bells for Löw, as disciplined teams can really upset that False No.9 system if it is not run perfectly.”

But with Germany only including one out-and-out centre forward in their squad, that of 36-year-old Miroslav Klose, it could be a system commonly seen in Brazil.

Klose is just two goals shy of overtaking Brazilian legend Ronaldo as the World Cup’s all-time leading scorer, yet Germany’s reliance on someone of his age is a particular concern.

“Klose’s body is unlikely to be able to get through the seven games required to win the World Cup and Götze and Müller are not completely suited to the False No.9 role,” Higgs continues.

“I think Löw will change systems if need be and the qualities of the opposition will of course come into it. But it is a concern – if Klose gets injured again and if Götze or Müller struggle as a False No.9, Germany will be in trouble.”

It’s a situation Germany can’t allow in Brazil, for anything less than World Cup triumph may ultimately go down as failure for a nation with fears of underachievement once more.