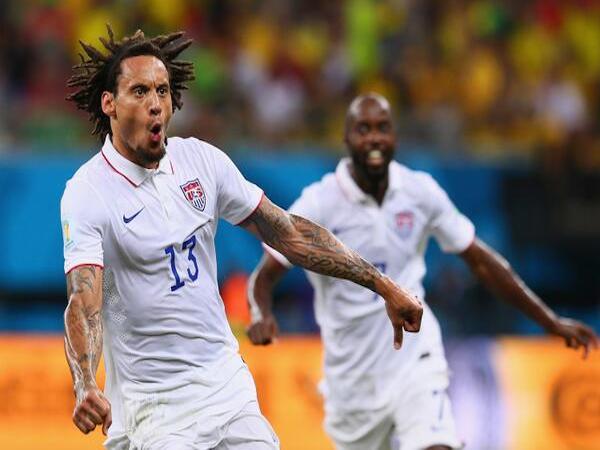 The USA is continually proving its position as one of world football’s most brave and courageous sides.

Although they conceded a stoppage-time equaliser in a 2-2 draw with Portugal, they once again highlighted their fighting spirit and rubber stamped their undoubtedly improved quality in a fantastic second-half display.

They went behind through a fifth-minute Nani goal. But it didn’t deter Jurgen Klinsmann’s team, just as Andre Ayew’s late equaliser in their last match against Ghana didn’t.

Instead, they rallied and pushed Portugal onto the back foot. Clint Dempsey and Michael Bradley both failed to hit the target with good opportunities, while Bradley then had a shot scrambled off the line by Ricardo Costa.

Portugal, on the other hand, looked flat.

Defensive frailties were beginning to be exposed in the absence of Pepe and Fabio Coentrao, a midfield consisting of Raul Meireles and youngster William Carvalho was consistently overrun, while Nani, an unfit Cristiano Ronaldo and Eder looked disjointed in attack.

On the balance of play, the USA didn’t deserve to be behind and they weren’t for much longer.

Jermaine Jones, who had controlled the tempo of the match in midfield, hit a swerving 25-yard shot that arrowed into the bottom corner. A quarter of an hour later and Graham Zusi crossed for Dempsey, who bundled the ball home.

It typified the organisation and composure of a strong USA team that were now just nine minutes from a confirmed spot in the round of 16. But Portugal had one last sting in their tail.

Ronaldo, a peripheral figure on the match, crossed precisely for Silvestre Varela to nod past Tim Howard. With virtually the last kick of the match, Portugal’s hopes of qualifying for the knockout stages had been rescued – for a few days at least.

For the USA, the final result was heartbreaking, but the performance was once again reassuring.

Earlier on Day 11, Algeria moved one step closer to qualifying for the round of 16 for the first time in its history with a superb 4-2 win over South Korea.

The Africans built on an impressive opening display against Belgium, outmuscling their Korean counterparts with a rugged and physical game plan.

Algeria was direct, but it paid dividends. Islam Slimani ran onto a long ball and finished calmly to make it 1-0, Rafick Halliche nodded home a corner to double the advantage and Abdelmoumene Djabou made it three following Slimani’s knockdown, all prior to the half-time whistle.

Slimani was the key man up front, with his pace and power constantly getting the striker in behind South Korea’s defence.

After the break, Hong Myung-Bo decided to fight fire with fire and also went ‘Route One’ in an effort to spark a comeback.

Son Heung-Min controlled a long ball in unorthodox fashion with his back, but kept his composure to finish through the legs of Rais M’Bolhi.

Ki Sung-Yueng then forced a good save from the Algerian ‘keeper as the Africans were put under the pump.

But some fine work from Sofiane Feghouli and Yacine Brahimi resulted in the latter sealing the three points, despite Koo Ja-Cheol’s late consolation goal.

While Algeria must wait on their passage through to the knockout stages, Belgium secured their place with an unconvincing 1-0 victory over Russia.

In a dour encounter, it took until the 88th minute for substitute Divock Origi to break the deadlock, side-footing home from close range.

Hate it when the World Cup gets to this. Last late game. Last time 3 matches in one day live. And Jeebus, on Friday there ISN’T EVEN A GAME

In a World Cup full of goals, it’s probably not the best idea for a defender to make it even easier for opposition forwards by relaxing on the deck. I guess Portugal’s Bruno Alves missed the memo. When he took his precious time getting up after clearing a cross, not only did he let Clint Dempsey off the leash, but he also played him onside.

Belgium boss Marc Wilmots has done it again. His decision to replace Romelu Lukaku with Divock Origi paid dividends, with the 19-year-old scoring a late winner against Russia. Along with Marouane Fellaini and Dries Mertens’s efforts in the first match, all of Belgium’s goals have come from substitutes.

He ran the show in midfield for the USA and scored a wonderful goal, therefore Jermaine Jones is a deserving player to be crowned the best on Day 11. In what was arguably his best performance for his country, Jones dictated the tempo of the match from a deep-lying role and scored the 25-yard cracker that hauled his side into the contest.

The final round of matches begin as qualifiers for the round of 16 are confirmed. Brazil takes on Cameroon in Brasilia needing only a draw to progress, but a win to finish on top of Group A. Meanwhile in Recife, Mexico plays Croatia in a winner-takes-all contest, with a draw ensuring Mexico goes through.

In Group B, Australia finishes their World Cup campaign in Curitiba against reigning world champions Spain in a dead rubber. Elsewhere, the Netherlands face Chile in Sao Paulo with the winner topping Group B and avoiding a likely round of 16 clash with Brazil. A draw sees the Netherlands go through on top.