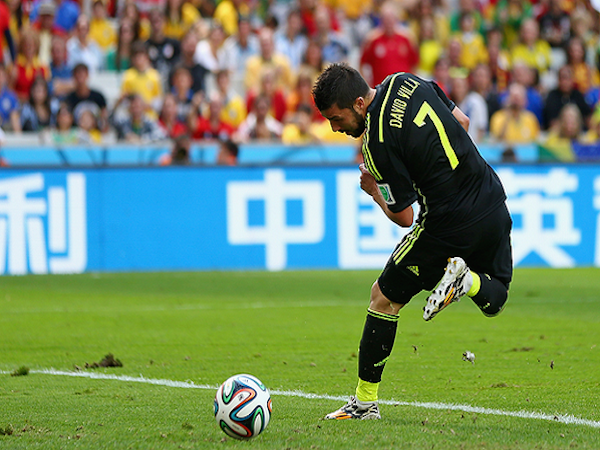 After two performances in which Ange Postecoglou’s Socceroos had given their absolute all, a tired and lethargic display from a young side could be forgiven.

It says enough about the team’s progression in Brazil that a 3-0 loss to the reigning World Cup champions and current World No.1 Spain would be met with such disappointment.

But there was a feeling in the build-up to the match in Curitiba that Spain were there for the taking and that Australia were prepared to upset the outgoing champions.

However, the loss of Tim Cahill to suspension and Mark Bresciano to a back injury withdrew any remaining experience the Socceroos had left over from Postecoglou’s cull. A young team was vulnerable and Spain, still packed full of world-class talent, were looking for their swan song moment.

Late in the first half, an incisive passing move began with Andres Iniesta splitting the Australian defence. Juanfran then picked out David Villa in the middle and the striker, who will play in Australia at A-League side Melbourne City next season, finished the job with a clever back heel flick.

Alex Wilkinson and Matt Spiranovic had gone missing, both choosing to cover the run of Fernando Torres and leaving Villa wide open in space.

Into the second half and another defence-splitting pass from Iniesta found the run of Torres, who finished calmly.

Substitutes Cesc Fabregas and Juan Mata then combined for a third, highlighting Australia’s glowing defensive deficiencies yet again as a promising tournament finished on a sour note for Postecoglou’s side.

But the markers of improvement are clear to see. Defensive solidity and a lack of polish in the final third were the only issues keeping Australia from shocking their more highly fancied opponents in Brazil.

And although they became the first ever Australian World Cup side to not pick up any points throughout the tournament, there’s reason why Socceroos fans can feel more optimistic about our future following Brazil 2014 than ever before.

#ESP lead the @Socceroos through this cheeky back-heel from David Villa. See him in 2014/15 > http://t.co/FATHX1zqYApic.twitter.com/4qy6Yi3vhe

In the simultaneous Group B fixture, the Netherlands recorded a crucial 2-0 victory over Chile to top the group with three straight wins.

Both teams had already qualified for the round of 16, but there was no air of a dead rubber tie in Sao Paulo.

In a cagey contest, it took until the 77th minute before Leroy Fer found space inside the area and thumped a header into the top corner. Minutes later, Memphis Depay sealed the victory when he bundled home Arjen Robben’s cross following an incisive counter attack.

In Group A, Mexico willed their way through to the knockout stages following an entertaining 3-1 victory over Croatia.

It was a winner-takes-all match in Recife, with a nervous Mexican side repelling their opponents effectively before a 10-minute burst at the death sealed their progression.

Rafa Marquez eased the tensions of manager Miguel Herrera when he headed home with 18 minutes remaining. Andres Guardado then doubled the advantage three minutes later when he side-footed home from a quick breakaway opportunity.

The Mexicans then went into party mode when Javier Hernandez’s back-post header made it three, confirming their place in the round of 16 despite Ivan Perisic’s late consolation goal.

Brazil also moved into the knockout stages, topping Group B with a 4-1 win over Cameroon.

Neymar put the hosts in front in Brasilia, only for Cameroon defender Joel Matip to immediately level the scores and force a stunned silence around the capital city.

But Brazil’s 22-year-old hero, Neymar, would once again inspire the nation. A fantastic solo run and finish put Brazil in the ascendency, before an accomplished second half display finished the job.

Fred turned in a third and Fernandinho finished off a slick passing move to make it four, easing the hosts into a round of 16 clash with fellow South Americans Chile.

The @Aleague represented in both attacks today. Adam Taggart for #AUS and David Villa for #ESP. Love it!

Mexico manager Miguel Herrera managed to inject more passion into Day 12 of the World Cup than anyone thought possible. In a nervous first half, the lively boss was flailing his arms everywhere. Then, once Mexico scored three goals in a 10-minute spell, the release of tension was evident to see. Whether it was fist-pumping or hauling down his own players, it had to be seen to be believed.

With Robin van Persie omitted from the Netherlands side due to suspension, the Dutch fielded an entire starting XI without a ‘van’ in it for the first time since 1996 – 221 matches ago.

As the end of Spain’s golden era drew to a close, it was fitting that Andres Iniesta put on one final show. He ran the midfield against Australia, twice splitting open the Socceroos’ defence with incisive passes that directly led to goals.

Group D kicks us off with a winner-takes-all clash between Italy and Uruguay in Natal. A draw would suit the Italians, who would progress on goal difference.

At the same time, the already qualified Costa Rica faces England in Belo Horizonte. The English will be looking to exit on a high, but Costa Rica knows that a draw, at the least, guarantees top spot in the group.

In Group C’s later games, Japan plays Colombia in Cuiaba knowing that even a win might not be enough to see them qualify to the round of 16. Colombia, meanwhile, only needs a draw to top the group.

In the simultaneous fixture, Greece plays Ivory Coast in Fortaleza with the African side needing a win to guarantee qualification. A draw, or a Greece win, could also do the trick for the respective nations, depending on the result of the other match.