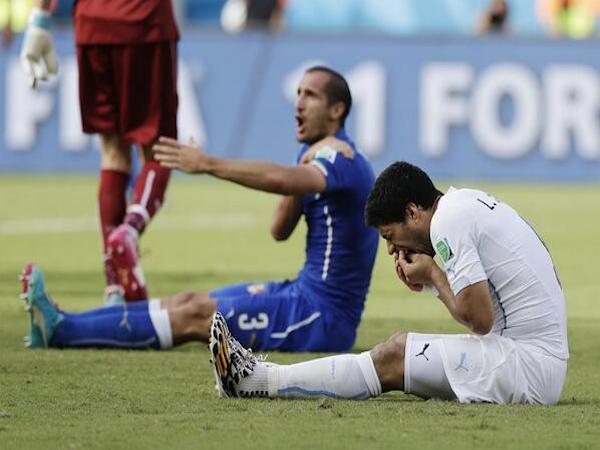 He just can’t keep out of the headlines.

Luis Suarez, just days after returning from a knee injury to eliminate England from the World Cup, is back in football’s bad books.

The striker once again undid 12 months of hard work to restore his image as one of the world’s best players, appearing to bite Italian defender Giorgio Chiellini in Uruguay’s 1-0 victory over Italy.

Suarez has since been charged by FIFA for the incident, the third time in a controversial career that he has bitten an opposition player, and will undergo disciplinary hearings in the days prior to Uruguay’s round of 16 clash with Colombia.

The Suarez incident overshadowed another memorable afternoon for a Uruguay side that is beginning to show a similar resolute determination as they did on their way to the semi finals in 2010.

Needing victory to secure their passage through to the knockout stages, Uruguay looked the only team willing to create chances.

Suarez had a shot saved by Gianluigi Buffon, Cristian Rodriguez volleyed wide and Edinson Cavani was also denied by the Italian ‘keeper in a fiery encounter in Natal.

Italy, on the other hand, were severely disappointing. Lacking cohesion and the motivation to press for the win, Cesare Prandelli’s side looked content to hold out for the goalless draw that would see them qualify in second place.

That was made harder when Claudio Marchisio was sent off for a reckless challenge early in the second half, with Uruguay now throwing men forward in numbers.

Just moments after Suarez clashed with Chiellini, which was not spotted by the referee, Uruguay struck from a corner.

And although Prandelli offered his resignation after the match, it was Suarez, who endured a frustrating afternoon even prior to the biting incident, that would dictate the post-match debate.

The length of his ban is under heavy scrutiny but, regardless of the time he’s expected to miss, one thing is for certain – we’ve seen the last of him in Brazil.

It meant England finished the tournament without a win, while Costa Rica progresses through to the round of 16 as group winners.

In the day’s later matches, a stoppage-time penalty from Georgios Samaras ensured Greece remarkably and controversially qualified for the round of 16 for the first time in its history with a 2-1 win over Ivory Coast.

Given the scoreline in the simultaneous match in Group C, where Colombia held a sizeable lead over Japan, it was a winner-takes-all clash in Fortaleza.

And similarly to the earlier game between Uruguay and Italy, it was the side who was willing to be more bold that took the rewards.

Greece struck the woodwork three times throughout the 90 minutes, eventually taking the lead when substitute Andreas Samaris took advantage of a defensive error from Cheick Tiote.

Ivory Coast worked hard to split open a solid Greece defensive structure and, with 16 minutes remaining, eventually did so through Wilfried Bony.

But deep into injury time, Samaras would win a penalty after being clipped by Giovanni Sio inside the area. Contact wasn’t deliberate, but it was there and the Greek striker stepped up to calmly convert his spot kick.

It was heartbreaking for Ivory Coast, who missed out on making the round of 16 for the first time ever in expense of the Greeks. But Sabri Lamouchi will regret a tame start from his players.

In the final match, Colombia qualified on top of Group C with a 4-1 win over Japan.

Shinji Okazaki had cancelled out Juan Cuadrado’s penalty on the stroke of half time, but an inspired second-half display ensured victory for the South Americans.

Jackson Martinez struck a brace to seal the win, while James Rodriguez scored an incredible individual effort to put the icing on the cake.

“I do not see why he would not play anymore at the World Cup, as you are suggesting. This is a World Cup about football. It’s not about morality.”

“Suarez is a sneak. I’d love to see if FIFA has the courage to use video evidence against him. The referee saw the bite mark too, but he did nothing about it.”

Would it be a World Cup match day involving Colombia without them featuring in our Celebration of the Day? This time Juan Cuadrado led the party after netting a penalty in a 4-1 win over Japan.

It’s been a fantastic tournament so far for 22-year-old Colombian James Rodriguez. On Day 13, he netted his third goal in as many matches, plus assisted a further two more, as the South Americans thrashed Japan 4-1. His strike, dribbling around one defender and sucking in another before lobbing the ‘keeper, was truly one to marvel at.

Group F finishes with Argentina needing only a point to qualify for the round of 16 on top. They face Nigeria in Porto Alegre, who will also take a point – as it will see them progress through to the knockout stages.

In the other match, Iran plays Bosnia and Herzegovina in Salvador needing a win (and an Argentine victory) to qualify from the group. Meanwhile Bosnia will be looking to sign out from their maiden World Cup campaign with victory.

Group E finishes the day, with France playing Ecuador in Rio. Although France aren’t technically guaranteed qualification from the group, a vastly superior goal difference means they’re like to progress on top regardless of the result.

Switzerland also plays Honduras in Manaus needing a victory and for other results to go their way to ease through to the round of 16. A France victory, or a draw, would confirm their passage. Meanwhile Honduras will look to leave Brazil with their maiden World Cup triumph.