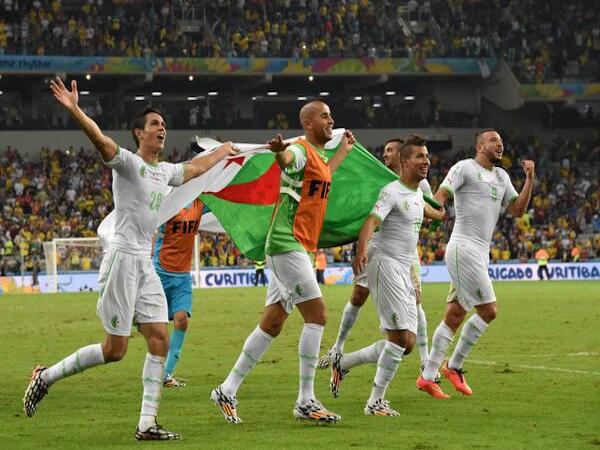 It’s the summer of the unexpected.

A fighting 1-1 draw between Algeria and Russia meant that, for the first time in its history, Algeria has qualified for the round of 16.

In doing so, the African nation joined Greece as debutants in the knockout stages, while Costa Rica and Nigeria had already progressed for just the second time earlier in the week.

It’s an incredible sight to see such ‘minnows’ of world football match it with the big boys. But for Algeria, their story is significantly remarkable.

For a nation divided by political protests spanning years, Algeria is slowly uniting the country through the wonder of football.

The people are bandying together, be it those who have journeyed to Brazil or those who are celebrating on the streets of Algiers.

And to think they entered tournament barely 10 minutes away from breaking the all-time record for longest period without a goal in World Cup history.

They were unfortunate not to secure a result against Belgium in their opening group match, leading for the majority of the game before succumbing to two late goals. They rectified those mistakes in a dominant performance against South Korea, where they ran out convincing 4-2 winners.

But against Russia, they face a different type of challenge.

Fabio Capello’s side needed victory to leapfrog the Algerians and progress. It was simply do-or-die for the Eastern Europeans and they didn’t look like they were going to give such an opportunity up too easily.

After just six minutes, they took the lead through a pinpoint Aleksandr Kokorin header, but they weren’t done yet.

They bombarded the Algerian goal, forcing several good saves from Rais M’Bolhi, but the resistance of the Africans was strong.

Eventually, on the hour mark, they struck back. Igor Akinfeev came for a cross and didn’t get the ball, with Islam Slimani finding the target through his back-post header.

There were nervous moments to finish, but the Algerians held firm to rewrite history and set up a round of 16 clash with heavyweights Germany.

Algeria made history in their 1-1 draw with Russia on Thursday. Highlights here (UK only): http://t.co/T8Kl87HbD9pic.twitter.com/LvhmRmsS7n

Algeria’s place in the round of 16 was confirmed shortly after when 10-man Belgium defeated South Korea 1-0.

Again, it was hardly an impressive display from Marc Wilmots’s side, who had Steven Defour sent off for a bad tackle late in the first half.

But Jan Vertonghen would seal Belgium’s third win from three, getting on the end of the rebound from Divock Origi’s initial shot, which was palmed away by South Korean ‘keeper Kim Seung-Gyu.

Earlier in the day in Group G, Germany sealed their place as group leaders with a hard fought 1-0 victory over the USA.

The match was threatened to be cancelled or postponed after heavy rain throughout the night in Recife, but went ahead as scheduled. The conditions made it a scrappy affair, before Thomas Muller lit up the contest in the second half.

His superb curling strike 10 minutes after the interval was the only goal in a comfortable German win.

But the result wouldn’t matter for the USA, who still progressed on goal difference from Portugal.

The Portuguese defeated Ghana 2-1, but fell four goals short of making up the ground necessary to qualify for the knockout stages.

Ghana defender John Boye had inadvertently put Portugal ahead through a comical first-half own goal, before captain Asamoah Gyan equalised for the African nation.

But in what was a disappointing day for Ghana, who earlier had sent home star players Sulley Muntari and Kevin-Prince Boateng for alleged indiscipline, they would concede late to relinquish the chance of progressing themselves.

I can’t believe some of you are still talking about Suarez after Portugal refused to stand behind the shaving foam. They shamed soccer.

FIFA have come down hard on Luis Suarez, banning the Uruguay forward for nine internationals and from football altogether for four months following a biting incident involving Italy defender Giorgio Chiellini. While Uruguay are planning to appeal the suspension, Suarez’s World Cup is definitely over.

Did an Algerian fan cost Russia a spot in the round of 16? Fabio Capello thinks so. Moments before Algeria equalised through Islam Slimani, Russian ‘keeper Igor Akinfeev had a green laser shooting into his eyes. He then inexplicably came for a cross, which he got no where near, and Algeria scored.

Tall, powerful and quick, Islam Slimani is proving Algeria’s most dangerous attacking threat. He enjoyed another fine afternoon as the Africans progressed through to the round of 16, scoring the equalising goal in a 1-1 draw with Russia.

The 2014 World Cup takes its first rest day tomorrow, allowing everyone to take a breather and prepare themselves for some mouthwatering round of 16 encounters.