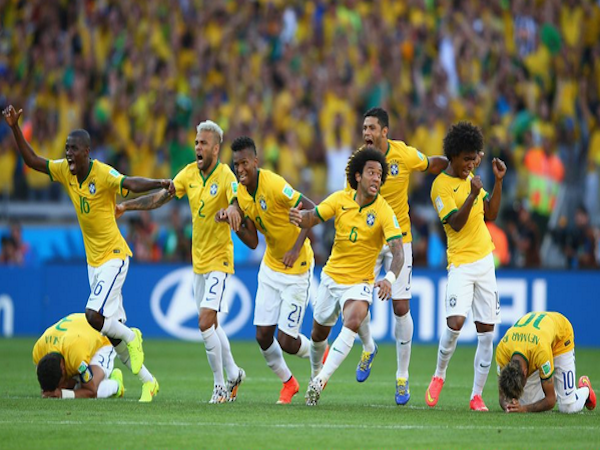 Never has the weight of 200 million dreams been placed so heavily on the shirts of five men.

For a few minutes, as the penalty shootout between Brazil and Chile took place in Belo Horizonte, a nation stopped. It held its collective breath.

They then watched Gonzalo Jara slice his penalty into the frame of the goal. A devoutly religious country had their faith in a higher power restored.

They say football is a game of inches. No one needs to tell Jara that. Nor Mauricio Pinilla. A coat of paint had denied both of them the chance to be national Chilean heroes.

Just moments before the conclusion of the 120th minute, Pinilla – fresh from the substitutes bench – crashed a 25-yard effort into the crossbar. The hard-working and relentless Chileans had been denied by the woodwork.

Little did they know it wouldn’t be the last time that happened.

Chile had been good. They hassled and harried a Brazil team carried through the match by an incredible atmosphere. Tears were aplenty following another emotion rendition of the national anthem. They were then overflowing when Luiz turned in Thiago Silva’s flick-on to give the hosts an early lead.

But Chile, to their credit, fought back. A sloppy turnover in possession from Hulk gifted Alexis Sanchez a wonderful chance and the striker didn’t need a second opportunity, burying his shot into the bottom corner.

An end-to-end match had the neutrals enthralled. For those with a more vested interest, one can only imagine the roller coaster of emotions following two hours of energy-sapping football.

No goals were scored as the game continued ticked towards extra time, but it wasn’t a contest without chances.

Hulk was denied after the referee adjudged that he controlled with his hands in the build-up, Aranguiz had a shot kept out by Cesar and Claudio Bravo was everywhere to repel Neymar.

A gruelling 30 minutes of added time went by in a flash and the lottery of a penalty shootout would ensue.

But Brazil couldn’t lose. 200 million people couldn’t have their dreams shattered in front of a watching world. Luck was on their side and, as Neymar collapsed to his knees and looked to the heavens, prayers were answered.

In the day’s other round of 16 clash, two more South American giants faced off with a more convincing Colombia coming out 2-0 winners over Uruguay – thanks largely to the heroics of James Rodriguez.

A cagey opening was forgotten about when Rodriguez’s stunning 25-yard volley energised the Maracana.

The combination of awareness to control the ball on his chest and swivel, then hit a dipping first-time strike that was executed perfectly, cannoning off the underside of the crossbar and in, made Rodriguez’s exceptional opener one of the best goals scored in recent World Cup history.

And it was no less than Colombia deserved.

In the absence of Luis Suarez, who had begun a four-month ban for biting Italy defender Giorgio Chiellini, Uruguay looked toothless and lacked penetration in the final third.

Conversely, Colombia’s endless waves of forays forward made them look far the more brighter and easily the more dominant side.

Soon after the half-time interval, Colombia had a second to their name and it was no surprise as to who was the scorer.

Pablo Armero’s cross was cushioned into the middle by Juan Cuadrado and Rodriguez arrived to divert the ball home.

He helped ease Colombia through to the quarter finals, where they will take on Brazil, and his brace took the youngster to five goals from four games from the tournament – the most of anyone in the competition.

It is a bloody marvellous, thrilling game at times. Never seen pressure like it on a footballer than when Neymar stepped up …

“We took upon ourselves this mission that we must be champions. If you make a promise, you must deliver. This is what the players are doing. There are three more games to see if we can reach heaven.”

Have you ever seen a moment quite like when Neymar stepped up to take Brazil’s fifth penalty? The golden boy of Brazilian football with a must-score spot-kick – you can’t script moments like that. Fortunately for the 22-year-old, he seems made for the big moments. There was nothing to fear as he buried his penalty into the bottom corner.

Another day at the World Cup, another fantastic Colombian celebration. James Rodriguez’s dancing effort following his second goal takes the cake this time around as he engaged in a duet with Juan Cuadrado.

This could just as easily be an award for the Player of the Tournament and James Rodriguez would still be the deserving recipient. The 22-year-old has been exceptional and capped off another thrilling display with two incredible goals of varying skill levels.

The round of 16 continues as the Netherlands face Mexico in Fortaleza. The Dutch have been one of the tournament’s most impressive sides thus far, but they face a Mexican team that did brilliantly throughout the group stages.

In the later match, it’s an underdog battle as Costa Rica and Greece look to qualify for quarter finals for the first time in their respective histories in Recife.