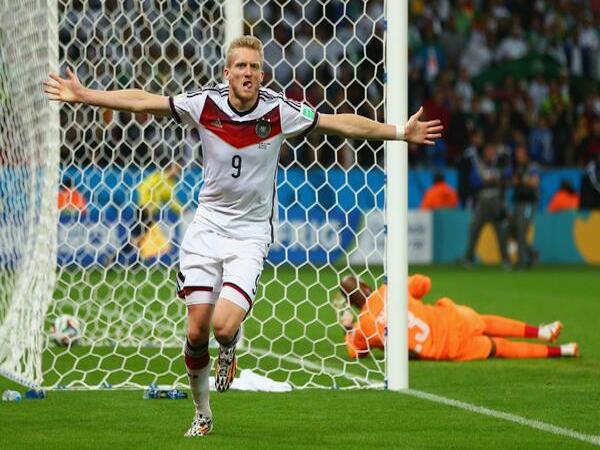 Who said you can’t have an entertaining 0-0 draw?

In Porto Alegre, football fans were treated to one of the most exciting matches of this year’s World Cup, with Germany and Algeria playing out a scoreless 90 minutes, before Germany eventually claimed a 2-1 victory following extra time.

It was a tale of two ‘keepers, with Algerian Rais M’Bolhi flinging himself both left and right to deny the Germans at one end, with Manuel Neuer’s awareness and alertness to repel Algeria in unorthodox fashion a defining factor at the other.

Neuer needed to be at his best to stop an Algerian side that burst out of the blocks. Keen to gain revenge for heartache suffered at the hands of West Germany in 1982, the Africans chased down every lost cause and constantly looked to release Islam Slimani in behind a high German defensive line.

Slimani’s pace and physicality was key and on a number of occasions he was able to bear down on goal, only to be stopped in his path by a proactive German ‘keeper.

Neuer incredibly made 59 touches during the match, 21 of which were outside of his 18-yard box – the most of any goalkeeper in World Cup history.

At the other end, M’Bolhi’s job was a little more routine. He was forced into numerous reflex saves to keep out a Germany side gradually working their way into the contest.

A magnificent double save to deny Toni Kroos and Mario Gotze was the highlight in an impressive display from the Algerian stopper.

As the match ticked towards the end of the 90 minutes, Algeria were now attacking solely on the counter. Germany was on the front foot, but their extra quality couldn’t find them an elusive winner.

It meant that, for the third day in a row, additional time was required. But it only took 90 seconds from the added 30 minutes for Germany to break the deadlock.

Thomas Muller’s cross found substitute Andre Schurrle in the middle and the German striker diverted the ball towards goal via a clever back-heel flick.

Germany continued in search of a second to kill off the match and with barely any time remaining on the clock, they found it. After Schurrle’s initial shot was blocked on the line, Mesut Ozil thrashed home an emphatic finish.

The match had suddenly come to life with a flurry of goals and now it was Algeria’s turn to strike. Sofiane Feghouli’s pinpoint cross made its way to Abdelmoumene Djabou at the back post and he finished nicely to halve the deficit.

But it was too little, too late. Germany clung on for a vital victory to seal their place in the quarter finals.

PHOTO: @Andre_Schuerrle is 1st #GER No9 to score at #worldcup since Carsten Jancker in 2002 – http://t.co/nPMmkoeLAVpic.twitter.com/spmoYOQ9Ki

The day’s earlier match between France and Nigeria had become a contest which the later game between Germany and Algeria would soon eerily reflect.

France was the team to progress to the final eight courtesy of a late 2-0 win, but it wasn’t without Nigeria giving the European giants an almighty scare.

Nigeria had raced out of the blocks and looked the more adventurous team in the early stages. Although they couldn’t find the back of the net, the likes of Emmanuel Emenike, Victor Moses, Ahmed Musa and Peter Odemwingie combined well to make a dangerous front four that caused the French plenty of problems.

The Africans had started with an energy and verve that France couldn’t match, but as the game settled, the French began to dictate the tempo and eased their way into the contest.

Nigeria could thank goalkeeper Vincent Enyeama for a series of stunning saves, denying Paul Pogba and Karim Benzema, before France hit the woodwork through Yohan Cabaye.

But eventually, with just 11 minutes remaining, France’s persistence paid off.

After working so hard to keep his opposition out, Enyeama was unfortunately at fault for the goal, not getting enough on his attempted clearance, with Pogba able to easily nod home into an empty net.

Just moments later and France had a second. Mathieu Valbuena’s cross was inadvertently put into the back of the net by Nigerian defender Joseph Yobo for an own-goal.

But while Nigeria could hold their heads high, it was France who was setting up an eagerly anticipated quarter finals clash with Germany.

The quality of goalkeeping at this World Cup has been extraordinarily high.

“Do you think just Mickey Mouse teams are in the last 16? All that matters is we’re in the quarter finals.”

– Per Mertesacker with an unusual way of defending Germany’s display against Algeria.

We all thought that Brazil’s hot weather could mean that fresh legs will play a big impact throughout the World Cup and it’s proving to be correct. A record 27 goals, including one from Germany match-winner Andre Schurrle, have been scored by substitutes.

It’s strange when a goalkeeper plays such an exceptional match, despite barely going within 30 yards of his own goal throughout the night. But that’s exactly what Manuel Neuer did against Algeria. The German sweeper-keeper was constantly off his line to repel Algeria’s quick counter-attacks, making more goal-saving tackles than goal-saving stops.

The round of 16 concludes when Argentina takes on Switzerland in Sao Paulo. The World No.5 Argentina have relied heavily on Lionel Messi thus far, but are starting to grow into the tournament, while the World No.6 Switzerland will need to be at their defensive best to repel their South American opponents.

Later in the day, Belgium plays the USA in Salvador with a chance at qualifying for the quarter finals up for grabs. Belgium haven’t reached their best yet, while the USA are beginning to hit their straps. It reads for another fantastic encounter.