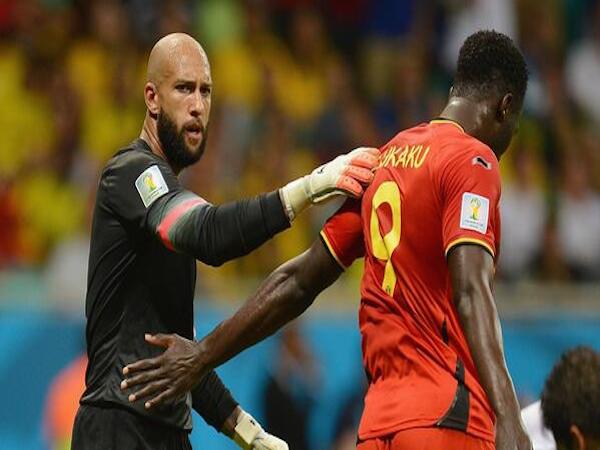 It was another breathless day in Brazil, with both remaining round of 16 matches requiring extra time to be decided.

In Salvador, Belgium edged across the line, defeating a brave USA team 2-1 thanks to some late heroics off the bench from Romelu Lukaku.

For 90 minutes, American ‘keeper Tim Howard had nearly one-handedly kept Belgium at bay while Lukaku waited for his chance on the pine.

His replacement in the starting lineup, 19-year-old Divock Origi, had enjoyed somewhat of a breakout game, despite not finding the back of the net. On numerous occasions, he tested Howard, with Eden Hazard, Kevin de Bruyne and Jan Vertonghen also denied by sublime saves.

But the USA’s incredible fighting spirit, which had been evidenced throughout the group stages, remained on show in a brave defensive display.

While the likes of Clint Dempsey, playing as a lone striker, was restricted to opportunities on the break, Belgium was able to easily assert their dominance. But still, come the conclusion of full time, they had nothing to show for their efforts.

Marc Wilmots turned to the bench and, having had substitutes score three of Belgium’s four goals thus far in the tournament, it was no surprise that Lukaku – the man called upon – would make an instant impact.

Within 90 seconds, his pace, strength and fresh legs immediately took him into the clear down the right hand side. He crossed for de Bruyne who, after controlling well, angled a shot into the bottom corner.

Howard was finally beaten and cut a forlorn and dejected figure. How would the USA respond now?

Jurgen Klinsmann opted to throw men forward, but Belgium hit on the break. This time it was de Bruyne setting up Lukaku and his swift finish doubled the Belgian advantage.

The USA brought on 19-year-old Julian Green midway through the second period of extra time. Just like Lukaku, the teenager would have an instant impact. His first-time volley found the top corner, reducing the deficit and once again highlighting the American courage that was becoming their trademark in Brazil.

Now it was the USA peppering Belgium’s goal but, despite a flurry of chances, they were unable to find the elusive equaliser.

Belgium had held on to book their place in the quarter finals… just.

Belgium will now play Argentina in the final eight after Lionel Messi again inspired the South Americans in a tense affair in Sao Paulo.

Switzerland had forced the Argentines into extra time via a goalless draw, with Ottmar Hitzfeld implementing a dense midfield that limited any attacking chances throughout the match.

But Messi’s brilliance set up Angel di Maria in the 118th minute to score the match winner and break Swiss hearts.

The statistics throughout the match may suggest Argentina dominated the contest, with 64% possession, but the display proved anything but.

Instead, they struggled to create any scoring opportunities. Messi was forced to drop deep to gain space and therefore he was unable to pull the strings in the final third.

But then, with just two minutes of extra time remaining, he changed the outcome of the match once again.

Barely 60 seconds earlier it seemed as though the best player on the planet could barely move due to persistent cramping, but in an instant he drove through the heart of the Swiss defence, carrying the ball past several tackles and teeing up di Maria in space.

The winger took his chance, sweeping a tidy finish past the ‘keeper to make it 1-0.

It appeared the winning goal, but Switzerland would have their chance to equalise – only to squander them in embarrassing fashion.

Blerim Dzemaili, an extra time substitute, was found in acres of space at the back post. Completely unmarked and with the Argentine ‘keeper beaten, he headed his effort into the post and prodded his follow-up well wide.

It was a shocking miss and proved the last kick of the match, as Argentina scraped through on the back of Messi’s brilliance once again.

Tim Howard and that US defence have been immense. Great teamwork and ethic. Belgium have some talented players. Sad to see one go out.

“I was nervous towards the end because we couldn’t score and any mistake could have knocked us out. The minutes were passing and we didn’t want the match to go to penalties.”

– Lionel Messi on the desperation Argentina felt to win the match in extra time.

The game between the USA and Belgium had an incredible 56 shots on goal, with Belgium having a pop 39 times throughout the 120 minutes. We said it yesterday and we’ll say it again today – who said goalless draws can’t be entertaining?

It’s got to be Tim Howard. Belgium’s 39 shots on goal included 17 on target. Of those, Howard was forced into making 15 saves – the most of any goalkeeper in World Cup history. It seems as though records are being smashed in Brazil on a daily basis.

With the quarter final match-ups now set in stone, players and managers of the remaining eight sides have two rest days to recuperate and focus on their upcoming matches. The first of which begins tomorrow.