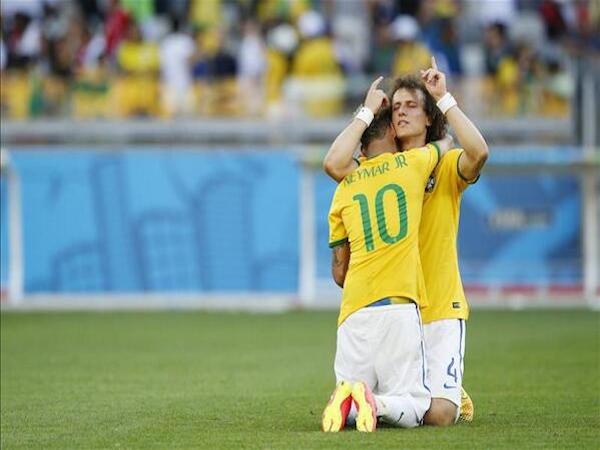 We all know that the World Cup has been one of the most entertaining and high-quality festivals of football that we’ve seen this side of the millennium.

Neymar with Brazil, Lionel Messi with Argentina, James Rodriguez with Colombia, Arjen Robben with the Netherlands and Thomas Muller with Germany have all shown why they were touted as the ‘ones-to-watch’ heading into this tournament.

Currently, Brazil 2014 is just 18 goals away from breaking France ’98s record of most goals in a single tournament. But, as the round of 16 has shown us, goals aren’t exactly the be-all and end-all in producing the most exciting matches.

Five of the eight knockout fixtures thus far have gone to extra time, with three of those ending goalless after 90 minutes.

But while the goals may not have been flowing in the type of way they were throughout the group stages, there’s still been drama aplenty.

There’s been penalty shootouts, late drama and thrilling comebacks to feast on as the business end of the tournament began.

But what makes this World Cup that much more intriguing heading into its final stages is that we still really can’t say who will win it from here. There’s no clear favourite going into the final phases of the competition, as perhaps there was in previous years.

Pre-tournament favourites Brazil have drifted in betting markets following some lethargic and stifling performances throughout the group stages. But while their displays haven’t been at the level many were expecting, they’re still the side to beat heading into the quarter finals.

Luiz Felipe Scolari’s team have shown deficiencies, not least their inability to overcome the crippling sense of expectation whenever they take to the field. But still, A Selecao have been able to will their way over the line in nearly every match.

Against Chile in the round of 16, although they weren’t at their best for 120 minutes, they found a way and, for the first time so far in the competition, they seemed able to use the intense atmosphere and home crowd advantage to their favour.

Julio Cesar looked galvanised with the crowd cheering him on throughout the penalty shootout, the team looked energised every time a burst of patriotic pride swept over the Belo Horizonte crowd and we also saw the first signs of an opposition team being genuinely overwhelmed by the sheer volume of their opposition’s national anthem.

Chile started slowly. They looked stunned by the magnitude of their opponents and in the early stages, a David Luiz goal left them behind and chasing the game.

Brazil also showed the first signs that they were able to deal with that burden of pressure. In the penalty shootout, they looked confident – especially Neymar, who held his nerve as the fifth penalty taker to great effect.

In the quarter finals, they’ll face a Colombian side riding a wave of positivity following another passionate display against Uruguay.

A 2-0 win, on the back of two sensational goals from young starlet Rodriguez, holds Jose Pekerman’s team in good stead. But they will provide a similar type of opposition for Brazil as Chile did when the tournament resumes on Saturday morning.

Scolari’s pre-tournament confession that he didn’t want to face any fellow South American teams until deep into the competition has come back to bite him. They’ll now face two, of similar quality and of similar styles, in consecutive knockout matches.

Both Chile and Colombia play energy-sapping styles of football, attempting to press and then strike rapidly on the counter.

But if Brazil can again overcome the challenge set to them again, they’ll move one step closer to ultimate glory.

And what a step it would be.

While they may not be playing the style of beautiful football we may have wished for at the beginning of the World Cup, Brazil are still the team to beat on home soil.

“The game against Chile was exciting for everyone, but the team does not have any emotional problem in the group.”

– Brazilian playmaker Neymar after it was revealed Luiz Felipe Scolari had requested a psychologist be brought into the team’s training camp to deal with the weight of expectation.

It might even be the Controversy of the World Cup if it’s proved correct, with German magazine Der Spiegel claiming convicted match-fixer Wilson Raj Perumal correctly predicted the score of the Croatia v Cameroon match on June 19. While FIFA claims they have found “no evidence of any match manipulation”, the German publication is standing by its report.

Another rest day. How will we ever manage?