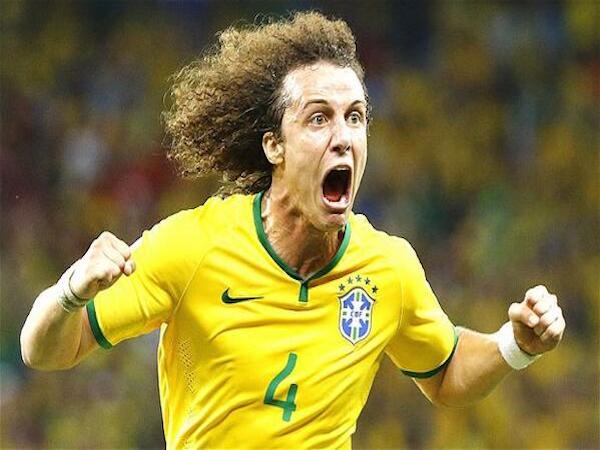 Brazil are one step closer to World Cup glory.

A fighting 2-1 victory over fellow South Americans Colombia showcased, for the most part, the extent of the host nation’s qualities, as the shackles were finally broken and the volume of support from the stands was finally embraced.

For the Brazilian stereotype of producing glittering and unstoppable forwards, it was two centre halves who fired A Selecao through to the semi finals.

Following another hair-raising rendition of the national anthem, Brazil came out like a team possessed. A sea of yellow swarmed on the Colombian defence, before captain Thiago Silva bundled in the opener on seven minutes to a deafening roar.

A Colombian side venturing into its first ever World Cup quarter final looked rattled. The ease and fluidity of passing that had become a trademark of Jose Pekerman’s team throughout the tournament was no where to be seen, as Brazil continued to dominate.

It appeared the only shining light for Colombia came from wonderkid James Rodriguez. In a battle of the tournament’s two best players in Rodriguez and Neymar, the Colombian outshone his Brazilian counterpart.

Coping exceptionally well with the pressure and physicality of the opposition defence, Rodriguez glided around the park, frustrated in his attempts to set free nervous teammates.

Colombia also had goalkeeper David Ospina to thank after a tremendous double save kept out Oscar and Hulk in quick succession.

But then, in an instant midway through the second half, a seemingly endless wave of Brazilian attacks ceased.

Whether the pressure of being just 30 minutes from a semi final was beginning to settle, we may never know. But panic set in and Colombia sensed an opportunity to strike.

They began playing the football that eased them through to the final eight and an unsettled Brazilian defence looked nervous. Mario Yepes thought he had equalised when he prodded home a scrappy chance, only to wrongly be denied by the offside flag.

It would soon prove a double whammy as, barely 60 seconds later, David Luiz would make it 2-0.

An incredible 30-yard free kick swerved and dipped its way into the top corner, much to the amazement of the jubilant home support. As Luiz raced away in celebration, the Colombians continued their protests in vein.

Colombia continued to pour forward and they would be gifted the opportunity of halving the deficit when Carlos Bacca was hauled down by Julio Cesar in the area.

Rodriguez kept his composure from the spot to score his sixth goal of the tournament, but it proved too little, too late.

However as Brazil celebrated, anxieties of a semi final showdown with Germany began.

Their captain, Silva, will miss through suspension. While their idol, Neymar, fractured a vertebrae late in the match and will miss the remainder of the tournament.

Earlier, Germany had booked their place in the semi finals with a 1-0 victory over France in Rio.

Mats Hummels was the scorer of the game’s only goal, returning from an illness that had kept him out of the round of 16 victory over Algeria with a fine header in the 12th minute.

Perhaps French defender Raphael Varane could have done better in defending the set-piece, but Hummels was too strong in the air, glancing home a precise effort that nestled in the top corner.

Germany were quite easily the better side, monopolising the play with nearly 60% possession in the first half.

France slowly recovered and saw more of the ball after the interval, but by then the Germans were set and virtually impenetrable.

Only a late Karim Benzema effort tested German ‘keeper Manuel Neuer, who had otherwise enjoyed a quiet afternoon in goal.

The pace of this game is ridiculous. Keep thinking someone has pressed x2 on Sky+

Germany have now qualified for the final four in 13 of 17 World Cups they have been involved in. However, they have only gone on to win three.

It was heartbreaking to see the holder of Brazilian dreams, Neymar, break a bone in his back, subsequently ruling him out of the tournament. The 22-year-old was in tears as he was stretchered off, but are his country’s hopes now following him out of the World Cup?

He didn’t just score the goal that sent Germany through, but Mats Hummels was also exceptional in defence in a standout display against France. The centre back made numerous crucial blocks and lunging tackles to keep his French opponents at bay.

Lionel Messi and co. will look to replicate Brazil’s feats, as Argentina seek to qualify for the semi finals when they come up against a talented Belgium team in Brasilia.

Tournament surprise packets Costa Rica will then look to continue their amazing World Cup journey when they face a highly-fancied Netherlands side in Salvador.