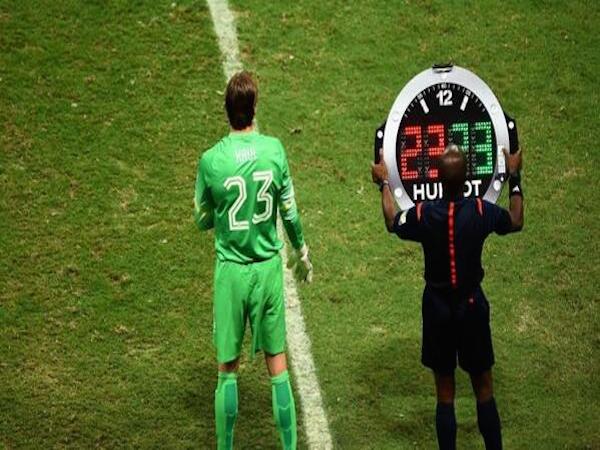 Louis van Gaal is developing somewhat of a reputation for his match-winning substitutions.

Against Australia, it was Memphis Depay. Against Chile, it was Leroy Fer. Against Mexico, it was Klaas-Jan Huntelaar.

Now, in a quarter final showdown with Costa Rica, it was Tim Krul.

It’s not often you see a goalkeeper subbed on to such great effect. Especially when he’s brought onto the field with mere seconds remaining and doesn’t even touch the ball during the match.

But after a goalless draw, Krul’s heroics in saving two Costa Rican penalties guided the Netherlands through to the semi finals.

The 6’4″ stopper dived the right way on all five Costa Rican spot-kicks, letting each taker know exactly what he (and they) were going to do beforehand. His job was to unsettle the Central Americans and he did exactly that.

While, in making such a drastic substitution, van Gaal may have relinquished the chance of winning the match in normal time (he made only two substitutions in 120 minutes), the sight of such an imposing goalkeeper coming onto the field with seconds remaining would have mentally shaken up the Costa Rican penalty takers.

The thought of facing someone who, when outstretched, covers a large portion of the goals, over someone like Jasper Cillessen – who is relatively small for his position – planted the seed of doubt into the minds of Jorge Luis Pinto’s men before they’d even reached the spot.

But while an exit via a penalty shootout is cruel for the Costa Ricans, their fairytale run to the quarter finals ends with their heads held high.

Pinto’s side conceded only one goal from open play from their five matches in Brazil – and even that came when they were down to 10 men against Greece.

Defensively, they were brave once more against the Dutch.

Only late attacks, which saw Wesley Sneijder strike the post from a free kick and Robin van Persie head against the bar, tested their defence in the first 90 minutes, while the impressive Keylor Navas again made some fine saves.

Sneijder would curl a shot against the bar in extra time, but Costa Rica deserved the lottery of penalties.

Unfortunately for them, they couldn’t replicate their heroics from the round of 16 against Greece with Krul, and indeed van Gaal, the story of the night.

Tim Krul was the hero as Netherlands advanced to the World Cup semi-finals. http://t.co/6DqwkqPqtgpic.twitter.com/4hg1ythRTe

The Netherlands will face Argentina in the semi finals after the South Americans secured a 1-0 victory over Belgium thanks to Gonzalo Higuain’s goal.

Another superb Lionel Messi performance was the catalyst for Argentina’s victory, with the diminutive playmaker virtually unstoppable drifting between the lines.

Argentina have been far from their scintillating best throughout the tournament, but they continued to find a way past their opponents – much like their fierce continental rivals, Brazil, with whom a dream Maracana final is looming ever closer.

Messi, who at times has looked as though he is dragging Alejandro Sabella’s side through the tournament, was again the most influential player on the park. On eight minutes, his delightful spin in midfield tied Belgium’s midfielders in a knot and led to the game’s opening goal.

The ball eventually found its way to Angel di Maria, whose deflected pass prompted a sumptuous and improvised one-touch finish from Higuain.

It was the game’s only goal as Argentina defended an endless stream of long balls from their Belgian counterparts.

The football from Marc Wilmots’s side was lazy and dire and, although Argentina defended well to repel the aerial threat of Marouane Fellaini and Romelu Lukaku, their job was made easier through the sheer lack of imagination from their opponents.

The trickery of Eden Hazard was stifled by the football Belgium opted to play, as the Europeans left Brazil with barely a whimper.

Alex Sabella is poetic, if unexciting . “Messi is water in the desert and today, when the terrain was dry, he gave us a breath of fresh air’

“We were not impressed by Argentina. They were just ordinary.”

– Belgium boss Marc Wilmots, who has clearly not watched some of the football they’ve played in Brazil.

From his hospital sickbed with a broken vertebrae in his back, Brazil’s Neymar recorded an emotional message to his fans and his teammates.

“My dream isn’t over,” Neymar said in tears. “I’m certain that my teammates will do everything possible so that my dream, which is to be a world champion, comes true.”

He’s been a joy to watch in this tournament and Lionel Messi was once again sublime in Argentina’s victory over Belgium. The No.10 was at the heart of every Argentine attack and, although he didn’t score, he was the shining light in their crucial 1-0 win.

The first of two rest days begin tomorrow ahead of the highly anticipated semi final clashes.