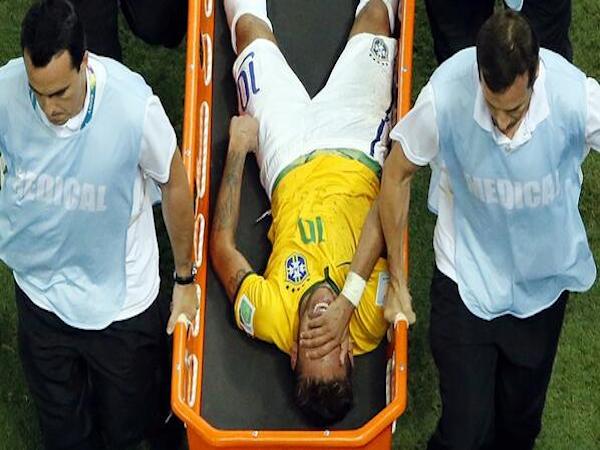 When a hushed Estadio Castelao watched Neymar stretchered off in tears following Brazil’s 2-1 quarter final victory over Colombia, there was a sense that the host nation’s World Cup hopes were following their star player down the tunnel.

A fractured vertebrae in his back could force the 22-year-old out of football for close to six months, let alone the rest of the tournament.

Now, with the only player to have sparked a misfiring Brazilian attack at this World Cup out of their semi final clash with Germany, Luiz Felipe Scolari’s headaches are worsening by the minute.

Brazil had already had their captain, Thiago Silva, ruled out of the semi final through suspension after the defender picked up his second booking of the tournament against Colombia.

It’s a decision that Scolari and co. plan to appeal, with Silva – who has arguably been the standout centre half of the World Cup – a vital component of the Brazilian team.

But with competent replacements in Dante and Henrique at centre back, it’s the absence of Neymar that will give Brazil the most cause for concern.

Neymar’s injury is a big blow, but other teams in World Cup history have overcome a giant loss http://t.co/Y6aMgxgRha pic.twitter.com/53QqdXBnEo

Far from the flashy Brazilian sides of old, Scolari’s charges have reached the semi finals through industry and a sheer will to win, rather than the flamboyant styles of yesteryear when the likes of Pele and Garrincha were lighting up the attacks.

But it’s Neymar’s trickery, pace and unpredictability in the final third that has given the team an injection of flair throughout the tournament.

Apart from Neymar – who scored four goals from three matches in the group stages – Oscar and Fred (one apiece) are Brazil’s only  forwards to have found the back of the net so far this tournament.

And in the knockout stages, the team has relied on goals from set-pieces, with David Luiz and Silva the scorers of their last three goals.

Neymar has also covered issues relating to there being no natural centre forwards in the Brazil squad. With Fred misfiring and his back-up, Jo, hardly a better replacement, Neymar has been able to roam in the space created by his No.9.

Without Neymar, there’s every chance the deficiencies of Fred – and the seemingly overrated Hulk – could be exposed further.

Neymar’s absence will also heap the burden of pressure onto the shoulders of another youngster – 22-year-old Oscar.

The midfield playmaker had a disappointing end to the 2013/14 Premier League season with Chelsea, where he looked fatigued following a long campaign. That tiredness has since followed him into the World Cup, where he has been a peripheral figure since a fantastic display in the opening match against Croatia.

In terms of Neymar’s replacement, Scolari has a number of options. Willian and Bernard appear the best like-for-like options, as both can produce pace, energy and verve down the flanks.

Ramires, a natural central midfielder who has been moulded into an industrious winger by Chelsea boss Jose Mourinho, could also fill a gap if need be.

Against a Germany side that controlled the match against France, dominating with nearly 60% possession in the first half of their quarter final, Brazil could have done with Neymar’s skill on the counter.

Instead, they will have to make do with yet another grinding performance, relying on their home crowd advantage and their impressive will to win to get over the line.

Scolari quoted in @Marca: “Marcelo ran up to Neymar and asked him how he was feeling and he told him: ‘I can’t feel my legs’.” — Henry Winter (@henrywinter) July 6, 2014

“There’s little left of that traditional Brazilian style of football. They’re playing more robustly than any other team here.”

– Germany manager Joachim Low on how Brazil’s flashiness has all but disappeared.

Another rest day begins ahead of the two semi final clashes.