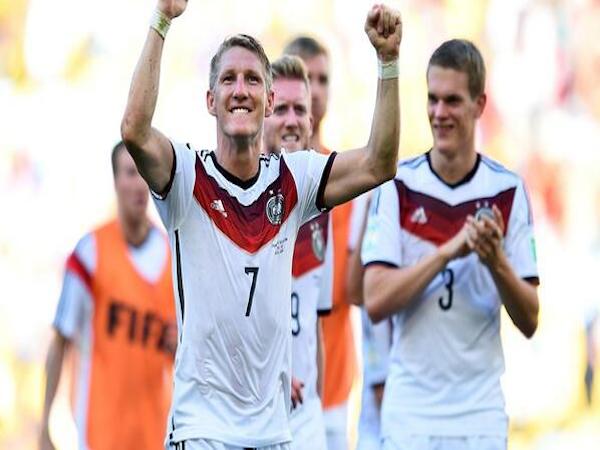 Prior to the tournament, a lot was made of the fact no European side has ever won the World Cup in a Latin American country.

Now, on Brazilian soil in 2014, two European sides have their best chance yet.

Germany is one of those sides, with Joachim Low’s charges beginning to find their best form ahead of a semi final clash with a depleted Brazilian outfit.

Many would have backed the Germans in this clash prior to the news that both Brazil’s captain, Thiago Silva, and their star player, Neymar, would miss through suspension and injury respectively. Now, Low’s chances of finally claiming his first piece of silverware as German boss seem all the more realistic.

Germany have coasted throughout the tournament. An emphatic 4-0 victory over Portugal in their first match highlighted just how powerful they could be when on form. But since, they’ve hardly needed a reason to get out of second gear.

A 2-2 draw with Ghana and a 1-0 win over the USA saw them ease through the group stages, before wins over Algeria and France followed in the knockout stages.

Although Algeria took them to extra time, it always seemed as though there would only be one winner when a fast start from their African opponents eventually settled.

In their biggest challenge yet, a quarter final showdown with France, the Germans looked as efficient and professional as ever. Their defence was hardly breached, while their midfield controlled the tempo of the match.

They ran out 1-0 winners and set up a semi final clash with a Brazilian team on its last legs.

Brazil have the home crowd advantage and, with it, the mental advantage over a European side. But with their two best players out, it seems that mental advantage is the only aspect in which their qualities overshadow Germany’s.

Brazil will want to win the title for @neymarjr, says Germany’s @BSchweinsteiger – http://t.co/awNaNK3Ukrpic.twitter.com/Tp2lkj6eMt

Germany’s European neighbours, the Netherlands, are the other continental rivals who have a chance at toppling what has proved a South American dominance in Latin America.

The Dutch, who have been arguably the most impressive side still remaining in the tournament, will come up against an Argentine team whose reliance on Lionel Messi is growing all the more important with each match.

With a tactically clever manager in Louis van Gaal at the helm, the Netherlands have navigated through two relatively routine knockout stage matches against Mexico and Costa Rica.

However despite their struggles in both, the Netherlands overcame their biggest challenges in the group stages, topping the so-called ‘Group of Death’ after convincing victories over Spain and Chile.

Arguably their biggest advantage coming into their semi final with Argentina is that the pressure is completely off van Gaal’s men. Not many expected them to get through the group stages, let alone make the final, so they are able to play without the strain of expectation.

The same can’t be said for Argentina, whose large band of travelling supporters have made each of their matches feel like they were being played at home.

Meanwhile an over-reliance on Messi, who again starred in a 1-0 victory over Belgium, appears to be taking its toll on their ability to play a natural style of football.

Instead, it’s led to disjointed performances, with teammates immediately looking for Messi as soon as they take control of the ball.

There’s no doubting that, while all four teams remaining in the tournament each deserve success in their own way, each are equally as flawed.

Are the two Europeans left in Brazil not showing as many weaknesses as their opponents? Only time will tell.

A sad truth about the context to the Neymar injury, from SBS; http://t.co/0qb31JqhN8

“The physical energy in that [Brazil’s] match against Colombia went beyond the limits. If that match had been played in Europe, 22 players wouldn’t have ended the match.”

– Joachim Low warns the referee to stop the excessive physicality of the Brazilian team against Germany in the semi final.

FIFA had its hands full and neither decision they made went the way of the Brazilians. Their captain, Thiago Silva, had his one-match suspension upheld, while Colombian defender Juan Zuniga was not punished for his tackle that left Neymar with a broken vertebrae in his back.