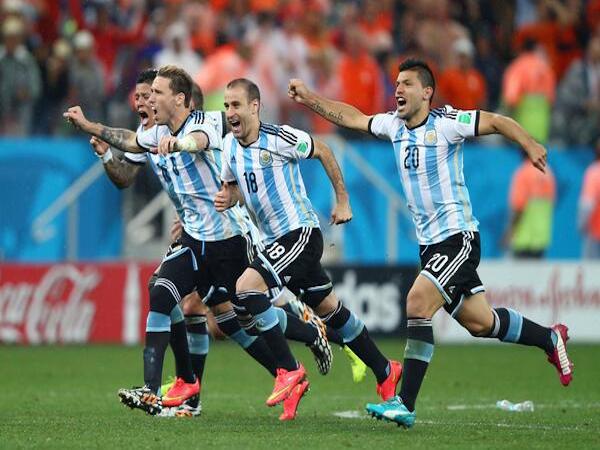 The teams are set in stone – Germany will play Argentina in the 2014 FIFA World Cup final at the Maracana on July 14.

The second semi final couldn’t have been more contrasting to the first, as 120 agonising minutes passed by without a goal.

Neither side even looked like breaching their opposition’s defence in a cagey encounter that ended in a penalty shootout.

From there, Sergio Romero was the hero, saving two Dutch penalties while his teammates kept their nerve to progress 4-2 from the spot.

It was somewhat of a deserved win for an Argentine team that looked to be the only side willing to create opportunities throughout the match.

Their opponents, the Netherlands, sat deep with five in defence and with Nigel de Jong dropping into the hole as a sixth man in an Oranje wall.

The game plan was to stifle Argentina’s attacking threats, with Lionel Messi the marked man.

Messi was quiet and incredibly well held by a combination of the hard-working de Jong, the outstanding Ron Vlaar and the overly-physical Bruno Martins Indi.

A frustrating two hours of football followed for Messi, who was hardly able to link with teammates throughout the match. But he would keep his cool when it counted, slotting the first spot kick to help Argentina to the dream Maracana final that their fans had desperately hoped for – and that Brazilian fans had desperately feared.

Messi will now get the opportunity to replicate the heroics of Diego Maradona in 1986, when the fellow Argentine great led his country to the major prize in Mexico – over none other than West Germany.

But for long periods of their semi final against the Netherlands, it appeared that might not be the case.

Although Javier Mascherano was impeccable in a brave and tireless display from midfield, he and his partner in the centre, Lucas Biglia, didn’t possess the creativity needed to unlock a stern Dutch defence.

But in the other direction, Louis van Gaal’s side hardly tested an Argentine back four that has been the backbone to their road to Rio.

Robin van Persie and Arjen Robben were stifled by van Gaal’s negating tactics, while Wesley Sneijder and Georginio Wijnaldum were forced deeper into midfield as part of a lifeless side with no intention of scoring.

It was hardly the tactical masterclass van Gaal had promised to deliver throughout the tournament, as a reactive Dutch side waited for an opposition slip-up, rather than pressing to make their own opportunities.

Three substitutions were used by the Dutch boss in the 120 minutes, meaning the quarter final penalty heroics of Tim Krul couldn’t be called up again when the match went to a shootout.

And in his place, the Netherlands No.1, Jasper Cillessen, hardly looked as imposing.

Messi, Ezequiel Garay, Sergio Aguero and Maxi Rodriguez struck their spot kicks with ease. While for the Dutch, Vlaar and Sneijder both had theirs wonderfully kept out by the athletic Romero, as Argentina secured a spot in the final.

Van Gaal: “So, Jasper, remember when I subbed you off for the last shootout? That was just a gag. I totally believe in you. Maybe.” — Brooks Peck (@BrooksDT) July 9, 2014

“I asked two players to take the first ball, before ending up with Vlaar.”

The usually unstoppable Lionel Messi didn’t touch the ball inside Argentina’s attacking penalty area once throughout the entire 120 minutes of football in their semi final. It’s fair to say he was well-held.

He was literally knocked out, but soldiered on to deliver a masterful midfield performance, therefore Javier Mascherano is a deserving recipient of this award. He completely controlled the match from a deep-lying midfield role, breaking up opposition attacks and then beginning Argentine forward thrusts.

The countdown to the World Cup final begins, with tomorrow’s rest day the first of two before the third-place playoff and the first of three for the finalists.