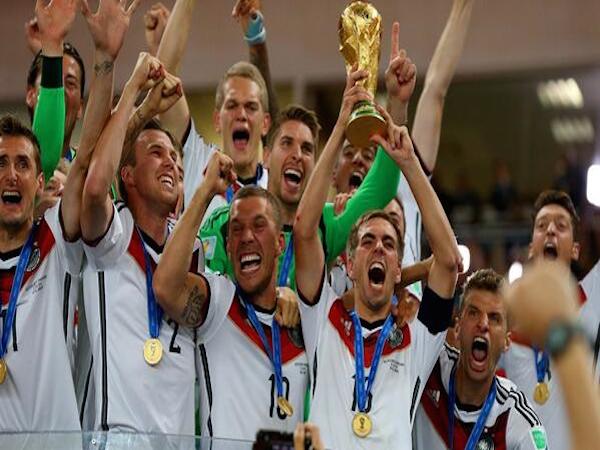 At the end of one of the most thrilling tournaments in the World Cup’s history, Brazil 2014 has a deserving winner.

Philipp Lahm lifted the trophy as Germany captain following an exhilarating, exhausting and tense World Cup final, crowning the European nation world champions for the fourth time – the first as a unified country.

Mario Gotze’s goal, seven minutes from time, was enough to secure the historic victory for Germany, who became the first European side in seven attempts to win the World Cup in Latin America.

It was a fitting way to end a tournament that had showcased some of football’s finest talent, with a ruthless and effective German team clearly the World Cup’s best side.

Convincing victories over Portugal (4-0) and Brazil (7-1) in their biggest tests so far in the campaign held Joachim Low’s side in good stead ahead of the final. But at the Maracana against Argentina, they wouldn’t have it all their own way.

Alejandro Sabella’s side had set up to frustrate and looked to counter rapidly with pace. It was a cunning way to dismantle a German machine that had effortlessly picked opposition defences to pieces throughout the tournament. And it nearly paid dividends.

Gonzalo Higuain volley wide after being inadvertently set through by a blind back-pass from Toni Kroos, Jerome Boateng cleared Lionel Messi’s shot off the line following a slaloming individual run and Higuain put the ball in the back of the net, only to be fractionally ruled out for offside.

It was a fast start as the fears of a typically cagey, nervous opening to a World Cup final were alleviated.

Germany, who had Sami Khedira ruled out prior to the match with a thigh injury and saw his replacement, Christoph Kramer, substituted early following a heavy collision, eventually regrouped after significant disruptions.

Through Bastian Schweinsteiger in midfield, they began controlling the tempo of the game and forced Argentina deeper into defence with a sustained spell of possession.

They nearly made Argentina pay for their early profligacy, right on the stroke of half time. Benedikt Howedes’s thumping header crashed against the post following Kroos’s corner, much to the relief of the large band of travelling Argentine supporters.

The pattern of the match continued after the interval. Messi, who endured a frustrating evening and only appeared to have any real impact in short, sharp spells, dragged an effort wide after racing through on goal.

As the match entered extra time for the seventh time in World Cup final history, there became a sense that it would only take a moment of madness or a moment of brilliance to separate the two sides.

The additional 30 minutes had both.

First, the madness. Argentine substitute Rodrigo Palacio was put in the clear, but with the goal at his mercy, he, like so many of his teammates before him, panicked and sent a tame chip agonisingly wide. It was Argentina’s 10th shot on goal. Tellingly, none had been on target.

Then, with 113 minutes on the clock, came the brilliance. Andre Schurrle’s pinpoint cross found Gotze in the middle and in one swift, single-motion action, the 22-year-old controlled the ball on his chest and volley into the bottom corner.

It was a fine goal, the 170th in a tournament that had produced some stunning strikes and, while this may not have been the best, it was far and away the most important.

Argentina had nothing left in the tank. They couldn’t muster one final opportunity and, as a result, Germany held on to be crowned 2014 FIFA World Cup champions.

“I told Gotze at the break in half time at extra time: ‘show you are better than Messi, show you are a better player than him and can win a World Cup.'”

– Germany manager Joachim Low on his half time instructions to match-winner Mario Gotze.

14 of Germany’s 23-man squad that travelled to Brazil are under 25. This team truly does have the ability to become a juggernaut.

It was 120 minutes where Bastian Schweinsteiger was battered from pillar to post, but stood tall to deliver a masterclass in midfield. His ability to control the play, in the absence of one of his finest midfield colleagues in Sami Khedira, was exceptional.