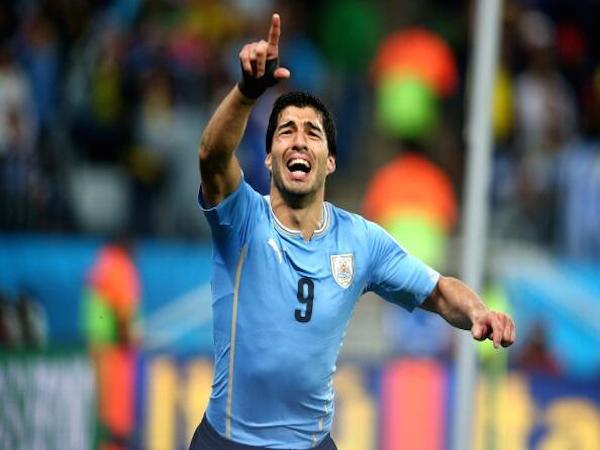 It just had to be Luis Suarez.

The long-time nemesis of English football, the pantomime villain of the World Cup and the man who just 24 days ago underwent surgery on a meniscus injury that was supposed to rule him out of the tournament.

For England fans that desperately feared his name on the team sheet, all of that would inevitably equate to a timely return for Uruguay to score a brace in a 2-1 win for the South Americans.

It’s a brace that also leaves Roy Hodgson’s side on the brink of early elimination from the World Cup.

The striker, who notched 31 goals for Liverpool last season on his way to the PFA Player of the Year award, wasn’t even deemed 100% fit by Uruguay manager Oscar Tabarez.

But his gamble to start Suarez paid dividends, with the diminutive forward coming back to haunt an English defence that had been traumatised enough by the Uruguayan last season.

England, constantly the headline-makers at major international tournaments, changed shape in midfield following a loss to Italy. It meant a slower tempo to the match, with chances few and far between in the opening stages.

But eventually Suarez would spark what had been a dour first half. Getting on the end of Edinson Cavani’s superbly executed pass, the Uruguayan sent his header back across the face of goal, planting his effort into the bottom corner.

England looked shellshocked going into the break and it appeared to hamper their attitude after the interval as Uruguay began to push forward in numbers.

A host of Uruguayan chances had gone to waste and the South Americans perhaps should have been out of sight by the time Wayne Rooney equalised on 75 minutes.

Some superb link-up play from Daniel Sturridge and Glen Johnson down the right resulted in a ball played to Rooney at the back post. The finish was simple, with Rooney notching his first World Cup goal in 10 attempts.

But just when England thought they had secured a point that would put qualifying for the round of 16 in their own hands, Suarez ripped that away from them.

A fortuitous break fell for the Uruguayan, who kept his composure to blast an emphatic finish past Joe Hart. Suarez was nearly in tears as he raced away to celebrate, swamped by the entire Uruguayan side on the touchline.

England couldn’t find a response, leaving their chances of qualification for the knockout stages all but over.

[PIC] Raw emotion for @luis16suarez after banging in his second goal for #URU. It’s 2-1! #SBSWorldCup#URUENGpic.twitter.com/cmOj0TNMIy

Earlier in the day, Colombia sealed their passage through to the round of 16 with a hard fought 2-1 victory over Ivory Coast.

A quiet first half came to life after the interval when 22-year-old starlet James Rodriguez gave the South Americans the lead.

For all of Rodriguez’s tricky work and elusiveness with the ball at his feet, it was with a thumping header from Juan Cuadrado’s corner that gave Colombia the lead.

Just six minutes later and another devastating counter attack, perfected by manager Jose Pekerman, put the Colombians two to the good. Serey Die was caught in possession by Teofilo Gutierrez, who slid Juan Quintero through to score.

But the Africans refused to lie down and a superb individual effort from Gervinho would halve the deficit. The winger escaped from the clutches of two defenders and cut inside another before angling a near-post shot past Colombian ‘keeper David Ospina.

But despite a series of lofted Ivorian passes thrust into the area, mostly through impressive right back Serge Aurier, Colombia held on to book their place in the round of 16.

In the day’s final game, Japan and Greece played out a dull 0-0 draw that kept the chances of both sides narrowly alive.

Greece were reduced to 10 men in the first half when captain Konstantinos Katsouranis was sent off for two bookable offences. But the Euro 2004 winners ground out a solid defensive display to keep Japan at bay.

Roy Hodgson has said Suarez is not yet a world-class player and needs to prove his quality. Do you agree? #SSN

“Before the game too many people in England laughed about my attitude over the last few years… I want to see what they think now.”

Are you noticing a pattern here? The Colombians aren’t just entertaining us with their football, but with their celebrations as well. Just days after their effort against Greece, James Rodriguez led an all-in dance that seemed as though it had been choreographed better than their lethal counter attacks.

Who else? The occasion was made for Luis Suarez and he didn’t disappoint. A brace against an England side featuring six of his Liverpool teammates was one to savour for the returning Uruguayan striker.

Costa Rica could put the nail in the coffin of England’s World Cup hopes if they get a result against Italy in Recife. However an Italian win, which appears likely, would throw Group D wide open.

Switzerland then takes on France in Salvador with the winner likely to progress on top of Group E, before Honduras plays Ecuador in Curitiba with the loser likely to be eliminated from the World Cup.