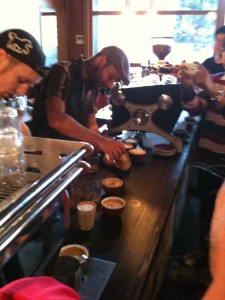 The two young men took turns while laughing and engaging with the large crowd that had moved on from the music. It was an ‘art off’ each barista pouring and pouring to make a better design on top of their latte. The crowd was buzzing, perhaps in awe of the way an everyday beverage could be turned into such a masterpiece. Although I’m sure the free coffee added to the excitement.

Last Sunday St Ali invited enthusiasts to watch their baristas demonstrate their craft and give a behind the scenes look at their roasting facility. The South Melbourne laneway, where they’re nestled, was closed down in order to show off what they do best, make coffee.

The event was held in conjunction with Melbourne’s first food blogging conference (Eat.Drink.Blog.) and photo exhibition which were also sponsored by St. Ali. With that many people devoted to food and espresso walking around, you better believe that everything I consumed was nothing short of perfection.

There were kiosks set up throughout the space. Sensory Lab, St Ali’s new endeavour, were handing out coffee made from a Syphon and Der Raum were mixing beautiful concoctions full of alcohol and Caribbean spices. The DJ mixed from an apple which gave the laneway a backyard bbq sort of appeal.

The ‘art off’ was like watching two break dancers in the middle of a wooden floor work off one another. The first move was simple but when the one-upmanship started, the designs became more and more complex with the audience clapping and smiling throughout the way.

After the show St. Ali’s soft-spoken roaster tried to take the audience through the process. Unfortunately, the caffeinated crowd and his lack of projection turned the tour into a Q and A, the main question being, “could you repeat that?”

Nevertheless, we were all able to walk around their two roasters and glimpse into the amount of work it takes to turn beans into a trademark. 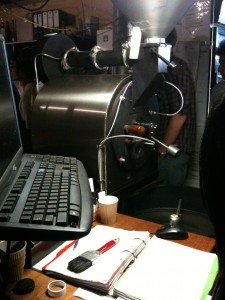 My evening ended with a single ristretto made from their espresso blend. After the two strong cocktails I had tried from Der Raum, it was the perfect finish to a late afternoon indulgence.

Meghan Lodwick is a Master of Global Communications candidate at La Trobe University. This caffeine-induced entry was originally published in her blog, For the Love of Beans!