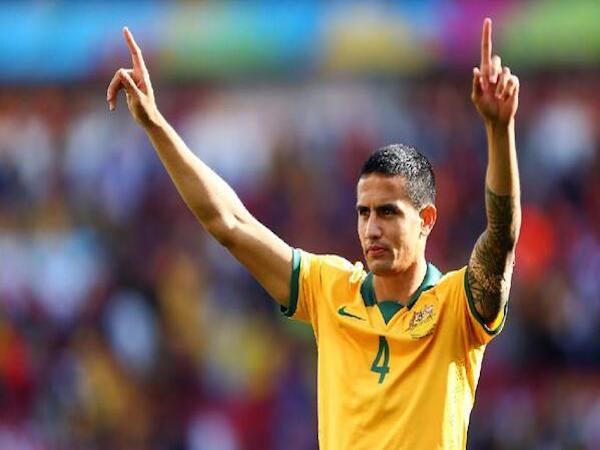 For four beautiful minutes, Australia had what rightfully belonged to it.

A precious 2-1 lead over 2010 World Cup runners-up the Netherlands, vanquishers of the Spanish juggernaut a few days earlier. It was earned through hard work, hard running and Tim Cahill’s left-footed thunderbolt.

It was inevitably not to be. For four beautiful minutes, Australia was winning, yet it was snuffed out in an instant through a Robin van Persie strike which cannoned into the back of the net.

The tournament is over for the Socceroos, despite a match-up with the similarly beaten Spain next Tuesday morning. But the team which so many wrote off before the World Cup had even begun have earned the respect from those around the world.

Tim Cahill: It’s probably one of the best Socceroos teams I’ve ever been a part of Pic: Getty http://t.co/z8PfqnrnZ6 pic.twitter.com/DUnpYxwJyq

With first-choice talent like Robbie Kruse ruled out months in advance with ACL injuries, soon to be joined by Marco Bresciano’s heir apparent Tom Rogic, as well as crucial defenders like Trent Sainsbury and Curtis Good, nobody gave the young Socceroos much of a chance.

A nation watched, spellbound, as they first faltered, overcome by nerves and perhaps the sense of the occasion, to crumble twice inside 15 minutes against Chile.

But the nerves were replaced by resolve – Cahill scored, Mathew Leckie burned and it was Chile’s turn to forced onto the back foot.

Then came the Netherlands match. After going down 1-0 to Arjen Robben – now officially the fastest footballer on the planet – it took just 64 seconds for Cahill to unleash the goal that earned worldwide acclaim. Comparisons to Marco van Basten’s wondergoal at Euro ’88 were made and a near-certain Goal of the Tournament award will follow.

After both matches, newly minted national coach Ange Postecoglou has been asked questions by travelling reporters, desperate to find out if he is proud of the side for achieving “honourable” losses, for pushing what the world sees as better teams all the way and falling just short.

Postecoglou had said that the overwhelming feeling after the Chile game was disappointment – that the Australians deserved a point, maybe three – that they felt they were the better team.

It was almost a carbon copy after the Dutch game – disappointment at the inability to convert chances, Cahill’s slightly overcooked through ball to Tommy Oar and the latter’s cross to Leckie’s midriff.

Through expressing his disappointment, Postecoglou is aiming to erase the “minnow” tag from Australian football.

It’s not that Postecoglou isn’t proud of his players. Far from it. Instead, seemingly, Postecoglou doesn’t see world rankings and cares not for reputation. It’s an understandable idea – were the tournament played on reputation, everyone bar Spain and Germany shouldn’t have bothered turning up.

Instead, he sees the Socceroos as equals to the Dutch, the Chileans, the Spanish and anything less than a result against all three is a disappointment and an opportunity lost.

It appears that no longer is it acceptable for Australia to simply waltz through a qualifying group, swatting aside Oman and Kuwait, make it to the World Cup and meekly depart, collecting plaudits for just being there and experiencing the best the world has to offer.

Instead, Postecoglou has the Australian squad believing that their rightful place at the World Cup is pushing, challenging, leading, scoring and frightening the best teams in the world.

Removing the ‘just-happy-to-be-here’ attitude instilled in the playing group from coaches gone by will take time. It will take less time for the supporters, whether they’re die-hards or not, to come around to Postecoglou’s way of thinking.

It will be a different squad next time around in Russia in 2018. Cahill has likely played his last World Cup game for Australia, Bresciano is, in the words of Postecoglou, “struggling physically” and Kruse, Rogic and Sainsbury are walk-up starts when fit.

Australia led for four beautiful minutes in Porto Alegre. We now have four long years to wait before we get our next chance.