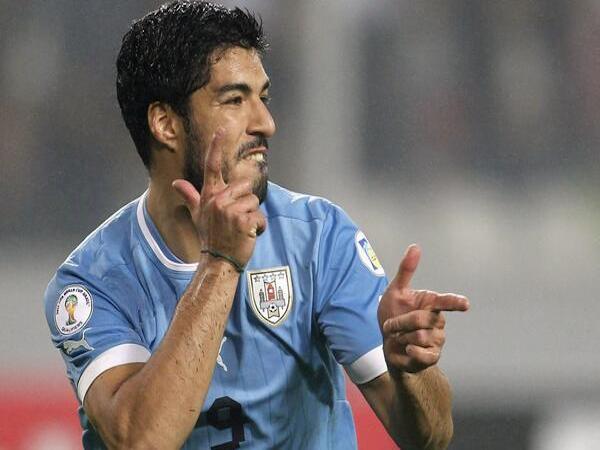 Uruguay’s hopes of taking any glory away from the World Cup rest on the shoulders – or perhaps more appropriately – on the knees of one of the best players in the world.

Luis Suarez, who went agonisingly close to dragging Liverpool across the line to Premier League triumph last season, is La Celeste’s best chance of getting a result out of an exceptionally strong Group D.

Suarez is devilish with the ball at his feet. He brings teammates into the play, can play in multiple attacking positions and sets up as many goals as he scores. Last season, he was a deserving recipient of the Premier League’s Player of the Season award.

Unfortunately, the toll of a physically demanding English league season beat Suarez down and, in a bid to be fit to lead his country out against England, Italy and Costa Rica, he underwent surgery on his knee. Interestingly, the operation was performed by Luis Francescoli, the brother of the man Suarez grew up idolising – ex-Uruguayan footballer Enzo Francescoli.

11 days after Liverpool finished their league season with a 2-1 victory over Newcastle, Suarez had damage to his meniscus repaired. In layman’s terms, the meniscus is the all-important piece of cartilage stabilising the knee during flexion, extension, and other movements.

For one of the best dribblers in the world, those movements are vital. Typically, recuperation from the surgery required to fix the meniscus takes six weeks. Suarez aims to be back in three, in time for Uruguay’s first game against Costa Rica on June 15.

#LFC star @luis16suarez is confident he will be ready to face England at the #WorldCup2014 http://t.co/G1gg1fuJFu pic.twitter.com/GBG7Hge2uG

He won’t be alone, of course. Together with Edinson Cavani, PSG’s imposing striker, who is a long-term reported target for Liverpool’s Premier League rivals Chelsea, Suarez forms a dangerous attacking combination. Cavani is no slouch either.

There’s also Uruguayan stalwart Diego Forlan, who went to the 2002 and 2010 World Cups. He was adjudged the best player at the 2010 tournament in South Africa, winning the Golden Ball trophy, and was the only Uruguayan player named in the Team of the Tournament.

Forlan is now 35 and almost certainly at his last World Cup, but desperate to prove he still belongs in the attacking trident for his country.

Ably supported by wingers Gaston Ramirez and Cristian Rodriguez, it all sounds pretty good for the Uruguayans so far. They have immeasurable amounts of talent with the ball going forward, provided by deceptive, hard-working strikers and lightning-quick wide midfielders.

However it all comes to a screeching halt in the centre of the pitch and gets worse in defence.

Diego Godin had a career year at La Liga winners Atletico Madrid playing at centre back. Sadly, he isn’t blessed with pace, more using his exceptional reading of the play to position himself effectively. His captain, Diego Lugano, could only manage nine Premier League games for West Brom, who conceded 59 goals and avoided relegation by three points.

Uruguay’s midfield is enthusiastic, but lacks the creativity and defensive nous to combat a World Cup group where Italy boasts a veritable cavalcade of gifted passing midfielders and England have the exuberance of youth on their side.

All these shortcomings in Uruguay’s team are the reason they struggled to even make the tournament. Their qualifying confederation is stacked – they finished behind Argentina, Colombia, Chile and Ecuador in fifth position – forcing them into a playoff against Jordan, which they promptly won 5-0.

The same happened in 2010 – they beat Costa Rica 2-1 over two legs after finishing fifth again – and of course in 2006, where they lost to Australia in on penalties after finishing – you guessed it – fifth.

Their qualifying results don’t exactly inspire a tremendous amount of confidence in La Celeste. However, it is yet to be seen how England’s much-vaunted youth policy will serve them and Costa Rica – although plucky – are likely no match for the Uruguayans.

On their day, Suarez and Cavani are arguably the most dangerous attacking pair at the entire tournament.

But it will have to be their day if Uruguay are to make it out of their group.