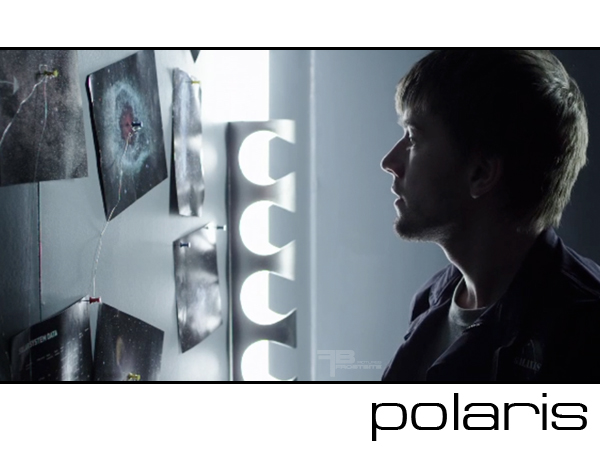 The series follows Milo,  a research scientist trapped on a damaged space station, drifting through space without communications or any means of determining location. His only companion is the station’s holographic AI interface, Donna, who keeps Milo from losing hope, and they work hard to keep the station’s life support systems operational.

Everything changes when a starship appears and its crew i determined to use the station’s resources to save themselves from their own predicament.

Peterson says the story is part of a much larger idea that she has had for many years. She loves the sci-fi genre immensely, and has always wanted to create her own epic saga, and Polaris is just the beginning.

It’s a science fiction story set in space! There’s been a bit of a lack of those on TV currently (though some new shows in development seem promising), but if you’ve been missing the Firefly/Battlestar Galactica/etc kind of sci-fi, then Polaris is the show for you.

The main reason I chose to make a web series is that I could tell the stories I wanted to tell in a format that was more conducive to the kind of storytelling I wanted to do, with the budget that I had. I couldn’t tell this story in a short film format, and I didn’t have the budget or time to make a proper feature. The web series format is this new exciting format that is open to all kinds of possibilities and filmmaking techniques.

All I hope for is that people are entertained, and hooked by the story. If someone who watches the first episodes of Polaris comes away from it wanting to see more, then I am very happy.

I was kind of lucky in that I was able to make the pilot episodes of Polaris disguised as a “short film” – my final grad film in my university film program, to be exact. Therefore I was able to apply for, and then use, a couple student loans to finance the production.

The biggest challenge was probably making this production work as a weird hybrid student film/web series production. About half the crew were film students with either very little experience or who had only ever worked on other student films. I think it turned out to be a good learning experience for everyone, and we made it through with only a few small mishaps!

We have not yet actively promoted Polaris publicly, and it has not yet been released online, so I’m not sure how well I can answer this question. However I’ve found that interacting with our audience, or potential audience, online via social media networks (Twitter, Facebook, Tumblr, etc) have been good ways of reaching viewers.

This is certainly only the beginning for Polaris. As it is right now, we have only completed the first three episodes as a kind of “pilot” for the series. I have written or outlined about 10-12 episodes for the first season, and have solid plans for more beyond that. As well, as I mentioned earlier, this is only one storyline in a much larger saga, which I would love to have the opportunity to make in the future. However as far as the plot of Polaris goes… at the end of the third episode, our protagonists have begun a journey to a certain place, and it’s going to take them the rest of the season to actually get there. They have a lot of obstacles to overcome along the way!

The first thing that comes to mind is that I have a nice fancy trophy from NASA for having won an international essay competition for high school students when I was 16. We wrote about what our theories were for the future of air transportation, and I was both the first student from Canada to ever enter the competition and I won first place. So that’s pretty cool, right?

Polaris on the web:

Polaris is currently represented by Frostbite Pictures — a Vancouver based digital media studio looking to create content specifically for the web.