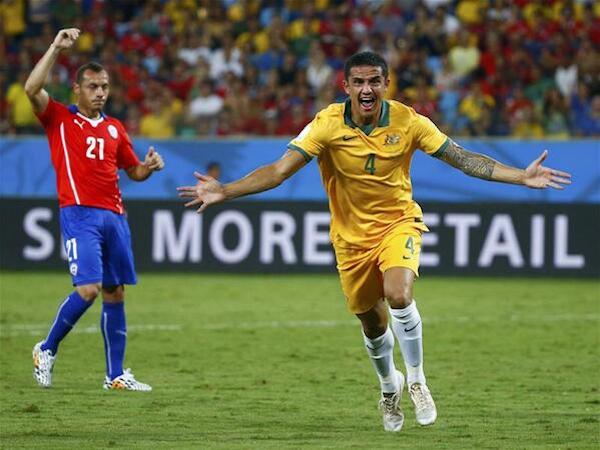 It was gallant. It was brave. But ultimately it was regrettable.

Australia’s World Cup campaign kicked off as many might have expected. A backs-to-the-wall effort was produced and Australia’s highly renowned fighting spirit once again came to the fore.

But a young Socceroos side was eventually outclassed by a highly-fancied Chile team, losing 3-1 in Cuiaba.

Early jitters for a squad as raw as Ange Postecoglou’s were inevitable. But on a stage such as the World Cup, you will pay for showing those type of nerves. Twice inside 14 minutes the Australians were cut open.

First by Charles Aranguiz, whose partially-cleared cross fell kindly to Alexis Sanchez. And then moments later when Sanchez, again at the heart of Chile’s foray forward, teed up Jorge Valdivia to make it 2-0.

The team showed courage to grind Chile’s momentum to a halt and force their way back into the match. Ivan Franjic’s desperate lunging tackle was rewarded, with the defender’s fine subsequent cross picking out the thumping header of Tim Cahill.

For the next hour, it was all Australia. Mathew Leckie was slicing through Chile’s defence in a breakout performance, Mark Bresciano was highlighting his wily experience and the maligned defensive pairing of Matthew Spiranovic and Alex Wilkinson, for the most part, held firm.

But while there were chances aplenty, there was no finishing touch. Fatigue began to set in late in the match and a side as good as Chile always looked like picking the game apart on the break.

It was hard to swallow for an Australian team that had defied expectations. But the performance could forever go down as the night an exciting new era began under Postecoglou.

While one era started, earlier on Day 2 another may have began to come to its conclusion. Spain, the reigning World and European champions, losing 5-1 to the Netherlands in an emphatic result in Salvador.

Spain were totally outclassed by their Dutch counterparts, who sought the slightest of revenge for the 2010 World Cup final.

While Vicente del Bosque’s team may have appeared comfortable, leading throughout the first half thanks to Xabi Alonso’s controversial penalty, the tide was soon to change.

Robin van Persie levelled with a superb diving header, before Arjen Robben put the Netherlands in front after the interval via a goal of equal quality. Stefan de Vrij bundled home a third, before van Persie and Robben completed their brace’s to seal a shock result.

Playing with a cutting edge hardly seen before, the Netherlands sliced Spain from side to side – dishing out del Bosque’s side a taste of their own pass-and-move medicine.

In the day’s first match, Mexico took advantage of Croatia’s defeat to Brazil with a 1-0 victory over a disappointing Cameroon side.

Giovani dos Santos had two legitimate first-half goals ruled out for offside, but ultimately had a final say in the outcome in the match.

His effort, just past the hour mark, was parried by Cameroon ‘keeper Charles Itandje, but straight into the path of the arriving Oribe Peralta, who touched home.

“Ange, Mike and the Socceroos… We’re behind you, we’re willing you on to victory and we know you’ll seize the moment.”

Take your pick from any one of Iker Casillas’s blunders. Was it being caught horribly off his line for the first? Was it having the ball stolen off his toes, Rene Higuita-style, for the fourth? Or was it the Spain captain crawling along the ground, attempting in vein to scramble after Arjen Robben for the fifth?

Following a brace in a stunning display, Arjen Robben is the name on everyone’s lips. His first goal was a touch of class, bringing the ball down with superb skill before eliminating two opposition defenders with a wonderful turn. His second was a teaser for Iker Casillas, as he dribbled around the Spanish ‘keeper before powering an effort into the top corner.

A Luis Suarez-less Uruguay will then aim to take advantage of their simple start to the World Cup against Costa Rica in Fortaleza.

Heavyweights England and Italy do battle in Manaus in what is one of the group stage’s most highly anticipated encounters, before Japan play Ivory Coast in Recife to end Day 3’s football festivities.