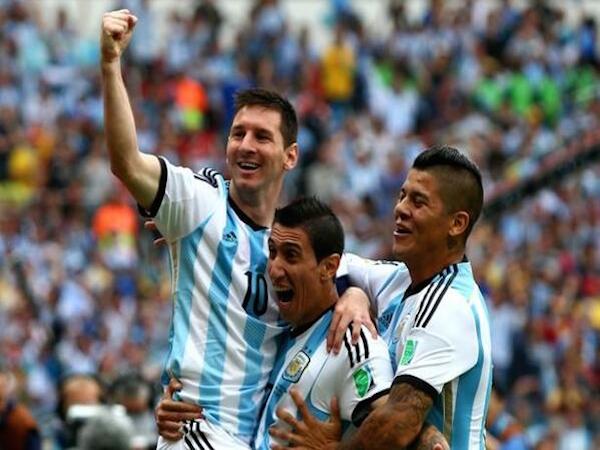 Despite the hyperbole, Argentina are not completely reliant on Lionel Messi.

They are, however, completely reliant on Messi in an attacking sense.

It’s a conundrum that Alejandro Sabella faces ahead of the 2014 FIFA World Cup final, but one that he might never have thought he’d be forced to endure given the breadth of attacking quality at his disposal.

With Sergio Aguero, Gonzalo Higuain, Angel di Maria and Ezequiel Lavezzi all complimenting Messi’s brilliance – and with Rodrigo Palacio, Maxi Rodriguez and Enzo Perez supporting as back-up options – Sabella had the luxury of leaving the talented Carlos Tevez out of his 23-man squad for the World Cup.

But ahead of the final, Argentina have scored just eight goals from their six matches, with only two coming in their three knockout games so far.

Of those eight goals, Messi has scored four of them, directly assisting two others.

Angel Di Maria scored the only goal in the 11th hour of extra time with superb work from Lionel Messi! #WorldCup pic.twitter.com/5Gsn4Cw0JJ

Somewhat surprisingly, Argentina’s road to Rio has been built on the back of a staunch defence that is yet to concede throughout the knockout stages.

The rise of 24-year-old left back Marcos Rojo has been a particularly pleasing element of Argentina’s journey to the final, while the ever-present Ezequiel Garay and Pablo Zabaleta are two others whose contributions have been pivotal to Sabella’s success.

In the last two matches, experience in the form of Martin Demichelis has provided a level head at the back, with Federico Fernandez unable to regain his spot in the team after being dropped for the quarter final clash with Belgium.

In addition, Argentina’s holding midfielders, in particular Javier Mascherano, have been sensational.

Mascherano is fast turning into one of the tournament’s most influential players, able to break down and dissect opposition attacks, while maintaining possession through simplicity in his passing.

Meanwhile Sabella’s ability to chop and change between Lucas Biglia and Fernando Gago in supporting Mascherano has been seamless.

But that could be where the problem lies for Argentina.

While Mascherano, Biglia and Gago have aided a back four that held lingering concerns going into the tournament, they have been unable to support Messi and co. in a creative sense.

Some may argue that with the aforementioned forwards in Sabella’s squad, they may not need to. But there’s no debating that the bulk of Argentina’s threats going forward rely heavily on Messi’s shoulders.

And with di Maria (thigh) and Aguero (leg) battling their way through the tournament with injury concerns, Messi is feeling the heat even more.

Against the Netherlands in the semi final, with di Maria and Aguero not able to start the match due to their respective problems, the Dutch were able to stifle Messi through tight man-marking.

Nigel de Jong was able drop deeper in case Messi drifted into midfield, Ron Vlaar was able to sit deep in case Messi took up a central role and the physicality of Bruno Martins Indi on the flanks ensured Messi couldn’t even float wide to gain space without encountering some brutal treatment.

The result was a quiet 120 minutes from the Argentine captain, who didn’t have a single touch in the penalty area for the entire match.

But if di Maria and Aguero are fit, they’ll each require the same sort of attention from opposition defenders, enabling Messi more space and time on the ball.

If neither are fit, even despite his unforeseen brilliance, Messi may struggle to have an impact against Germany in the final.

Rizzoli to referee World Cup final Sunday. 3rd time he gets ARG in tournament. Congratulations to him.

The three players in line for the Golden Glove, given to the Goalkeeper of the Tournament, are Keylor Navas (Costa Rica), Manuel Neuer (Germany) and Sergio Romero (Argentina).

The tournament ends for Brazil and the Netherlands, who face each other in the third-place playoff, to be played in Brasilia.