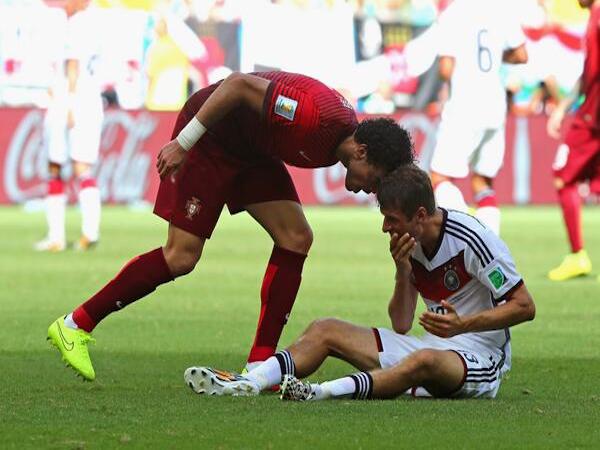 Another marker has been laid down – Germany are the real deal.

In an explosive encounter in Salvador, the Germans ruthlessly dispatched of the highly fancied, World No.4 Portugal. A 4-0 victory was, in the end, flattering for the Portuguese, who on another day could have easily conceded seven or eight.

Right from the outset, wave upon wave of German attacks were being thrust upon an increasingly frustrated Portugal defence.

Playing with a ‘False No.9’, Germany’s four-man attacking midfield took turns to interchange through central and wide positions. Just when Portugal’s defence appeared to have a read on who was playing where, Mario Gotze, Thomas Muller, Mesut Ozil and Toni Kroos would switch again, causing endless headaches.

The result was free-flowing football, with the likes of Philipp Lahm and Sami Khedira able to dictate the tempo of the match from midfield.

Muller was the hero, scoring the World Cup’s first hat-trick, but to say he shouldered the brunt of Germany’s attacking responsibility would be unjustified. Instead it was a team effort, with all four front men combining to send Gotze through on 12 minutes.

His strength forced Joao Pereira into a rash tackle, with a penalty immediately awarded. Muller tucked the resulting spot-kick calmly into the bottom corner.

Just 20 minutes later and there was a second. Mat Hummels, an unlikely scorer from centre back, thumped a header past a helpless Rui Patricio.

Portugal’s frustrations were bound to boil over eventually and it was no surprise when the hot-headed Pepe had his regular bout of white-line fever. The defender leant down over Muller following an innocuous challenge and proceeded to headbutt the German.

He saw red and from there, Portugal’s problems compounded. Muller scored in first-half stoppage time to make it three and, if not for some wasteful finishing in the second half, Germany could have inflicted one of the World Cup’s heaviest defeats.

Muller, the 2010 Golden Boot winner, went on to celebrate his 50th international cap by sealing his hat-trick late in the match. But from Portugal’s point of view, the damage had already been done.

They now hang onto their World Cup aspirations by a thread, while Germany boost theirs by no end.

Here’s that moment of madness from Pepe as #POR are a man light and now 3-0 down. http://t.co/2izyb8F4XX#WorldCuppic.twitter.com/8PvT01tDdJ

The Americans got off to the perfect start, with captain Clint Dempsey scoring the fifth quickest goal in World Cup history, netting a fantastic individual effort after just 29 seconds.

Dempsey controlled the ball with an expert first touch, cut inside with a nice move and then finished low into the bottom corner to send the USA fans into raptures.

Ghana were brave and, despite not finding an immediate response, the Black Stars put their foot down with a prolonged spell of second-half pressure. Eventually they were rewarded with a goal on 82 minutes. Andre Ayew fired past the ‘keeper with a powerful finishing following some lovely improvised interplay from Asamoah Gyan.

Many thought it was a strike that would guarantee a point. That was until USA substitute John Brooks nodded home the winner with just four minutes remaining – yet another dramatic chapter in what is proving to be an incredible World Cup.

But despite the goals and excitement, Iran’s dour 0-0 draw with Nigeria in Curitiba was one to forget.

Nigeria controlled the match, but couldn’t produce a cutting edge going forward, enabling the Iranians to easily hold on for a point.

Portugal would have had a better opportunity to win if Ronaldo had been playing. Oh.

In the age of digital media, there’s a fair few candidates. But look no further than Lukas Podolski’s effort with German Prime Minister Angela Merkel. It’s a beauty.

The expression on the face of 21-year-old USA defender John Brooks after he scored the country’s winning goal against Ghana was outstanding. It was one of sheer disbelief. It may be cliche, but seeing a reaction like that is exactly what the World Cup is all about.

After becoming the first player to score a hat-trick at the 2014 World Cup, Thomas Muller was easily Day 5’s star man. He couldn’t have asked for more on his 50th international appearance. He was also involved in Pepe’s red card, sucking the susceptible defender in brilliantly. Could he now become the first player to win two Golden Boot’s?

Day 6 kicks off with the highly-fancied Belgium getting their first opportunity to prove themselves on the big stage. They take on a plucky Algeria side at Belo Horizonte.

Host nation Brazil are then in action again as they face fellow Group A winners Mexico in Fortaleza. It’s expected to be another high-intensity and passionate affair.

The day then finishes with Russia taking on South Korea in Cuiaba, ending the first round of group games.