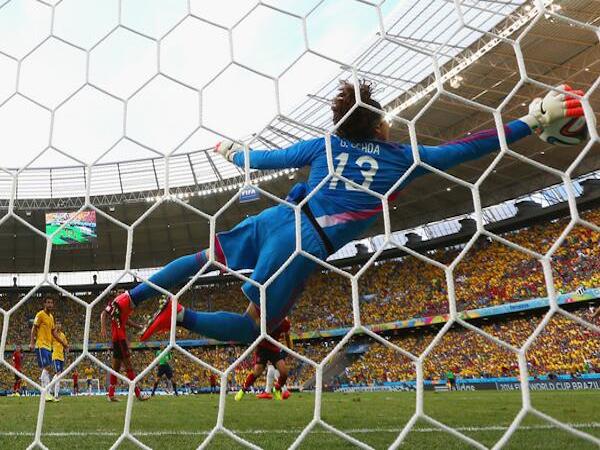 There’s a rumour that has done the rounds for years that Mexican goalkeeper Guillermo Ochoa has six fingers on one hand.

The speculation achieved its most attention when a news story broke in 2010, suggesting that the English FA had blocked a potential transfer to Fulham due to Ochoa allegedly having an “unfair advantage”, given his position.

The story and the rumour is fake, obviously, but after watching his heroics in Mexico’s 0-0 draw with Brazil on Day 6, there’s every reason to understand why the myth sprouted in the first place.

Ochoa was superb, producing a series of fine saves to thwart Brazil’s frustrated attack. His two stops to deny Neymar late in the first half and Thiago Silva late in the second half were particularly awe-inspiring.

The first, to keep out Neymar’s towering header, was one of real quality – springing quickly to his right to palm the ball to safety at full stretch. The second, to deny Silva in the dying minutes, was one that highlighted his superb reflexes – quickly adjusting his right hand to keep out a close-range header.

In truth, Silva should have done better with his late effort. Finding an abundance of space on the edge of the six-yard box, the Brazil captain glanced his header too close to Ochoa, making the save possible in the first place.

In a way, that missed chance reflected Brazil’s 90 minutes as a whole. Again, there was a similar level of passion and intensity inside Estadio Castelao in Fortaleza as their was for the country’s opening match against Croatia in Sao Paulo. But, even more so than in their first match, Brazil failed to break the shackles of expectation.

They were limited in their attacking play, with a combination of nerves and pressure not allowing Luiz Felipe Scolari’s side to play with their usual beautiful freedom. Mexico took advantage of this, producing a fine defensive display and offering an equal amount of quality going forward.

The valuable point leaves Miguel Herrera’s side on the cusp of qualification for the round of 16, with their final match against Croatia now crucial to their chances of progressing through the group stages.

For Brazil, there is work to be done. Perhaps not so much on their style of football, but on overcoming the burden of carrying an entire nation’s hopes heavily on their shoulders.

If they can’t do that, other sides with far more quality than Mexico will be able to easily exploit the clear chinks in their armour.

Day 6 could perhaps best be described as a tale of three ‘keepers. Preceding Ochoa’s efforts, Algerian stopper Rais M’Bolhi did his utmost to keep out a persistent Belgium side. However it wasn’t enough, with Belgium coming out 2-1 winners.

Algeria had taken an early lead through a Sofiane Feghouli penalty. The Valencia attacker was hauled down by Jan Vertonghen inside the penalty area and kept his cool to break a 28-year scoring drought for the African side in the World Cup.

Algeria had come within just 12 minutes of breaking the all-time World Cup record for the longest period without a goal, but avoided what would have been an embarrassing feat through Feghouli’s composed spot-kick.

Led by M’Bolhi at the back, the Algerians then put up a fantastic defensive display and increased the frustrations of what was a poor Belgian performance.

But the tournament’s most hyped side responded, with Marc Wilmots introducing Marouane Fellaini and Dries Mertens off the bench to devastating effect.

They became much more direct and it paid dividends, with Fellaini heading home the equaliser, before Mertens struck an emphatic late winner.

In the day’s final match, a mistake from Russian goalkeeper Igor Akinfeev nearly cost Fabio Capello’s side dearly. He allowed Lee Keun-Ho’s long-range shot to slip through his fingers with just 22 minutes remaining.

But luckily for Akinfeev, striker Aleksandr Kerzhakov saved his blushes, scrambling home a late goal to ensure both sides went home with a point.

Neymar was in tears at the end of that anthem. Don’t blame him. Goosebumps o’clock

– Brazil manager Luiz Felipe Scolari on claims the side is relying too heavily on 22-year-old Neymar.

It’s hard to go past Guillermo Ochoa. Mexico can thank their star goalkeeper for ensuring they secured a vital point. His contract at Ajaccio expires this summer as well – free transfer anyone?

All eyes return to the Socceroos on Day 7 as Ange Postecoglou’s team bids to keep their World Cup campaign alive. Australia faces the Netherlands in Porto Alegre, who are coming off a 5-1 win over reigning champions Spain – a daunting task indeed.

Spain will then look to make amends for that shock loss in the opening game when they play a difficult Chile team in Rio.

And to finish off the day, Croatia will seek to keep pace with Brazil and Mexico in Group A when they take on Cameroon in Manaus.